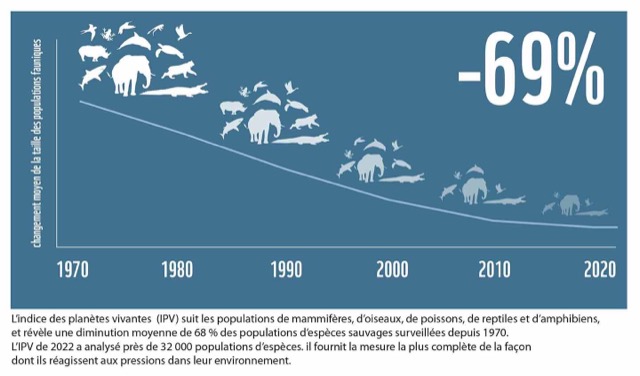 Cop 15, the United Nations conference on biodiversity, is being held tomorrow and until December 19, 2022 in Montreal. The opportunity for the whole world to be alerted to the decline of biodiversity, and to very seriously discuss the subject of the sixth extinction.

While climate change has taken an important place in political, media and daily debates, the impact of human activity on biodiversity is struggling to find its place among the main concerns of populations.

the whole first COP on biodiversity dates back to 1994, and was held in Nassau, Bahamas. 28 years later, the fight is the same, with added urgency. Some researchers and scientists have based themselves on studies to alert on a particularly important subject: we would be at the gates of the sixth extinction.

Life in many forms has almost completely disappeared from the face of the Earth five times in the past 500 million years. Each time, a major climate change was the main cause, as recalled National Geographic ahead of her interview with Elizabeth Kolbert, author of the book The Sixth Extinction, winner of the 2015 Pulitzer Prize.

A mass extinction, among other things, caused the dinosaurs to disappear completely from the surface of the planet. This sixth extinction would also be the result of global climate change, but caused in part by human activity.

While some still doubt the reality of the decline of the biodiversity, others have already noted a difference from previous years. For example, we can note the increasingly low presence of birds in cities, or even in rural areas. “In the plains, we have lost around 40% of the birds in 30 years”, confided Bruno David, naturalist and president of the Natural History Museum to French Radiolast May.

“The current rate of disappearance and decline of species is disproportionate to the rate of appearance of new species. If we do nothing, it will lead to a sixth extinction, and we could be among the victims.

A 69% decline in vertebrates in less than 50 years

These statements are supported by several studies, in particular the one conducted by the World Wildlife Fund (WWF) with the Zoological Society of London, on the Living Planet Index, published on October 13, 2022. It is based on scientific data collected on 32,000 populations of more than 5,230 species of vertebrates.

The conclusion, accompanied by unequivocal graphs, points in the direction of an imminent entry into the sixth extinction: between 1970 and 2018, the average decline of vertebrate populations is 69%.

What give a hard time to the participants of the COP 15, which will bring together the governments of the whole world to agree on a new series of objectives in order to curb this sixth extinction.

Biodiversity: what is the sixth extinction, of which man could be part?

Jonathan Reynolds dies: playwright, the screenwriter of "My mother-in-law is an alien" was 79 years ...
Superman & Lois: chronicle of a family almost like any other
Top 30 des meilleures séries Netflix à voir absolument
Tweet
Share
Share
Pin
Other links: https://awardworld.net/resources/