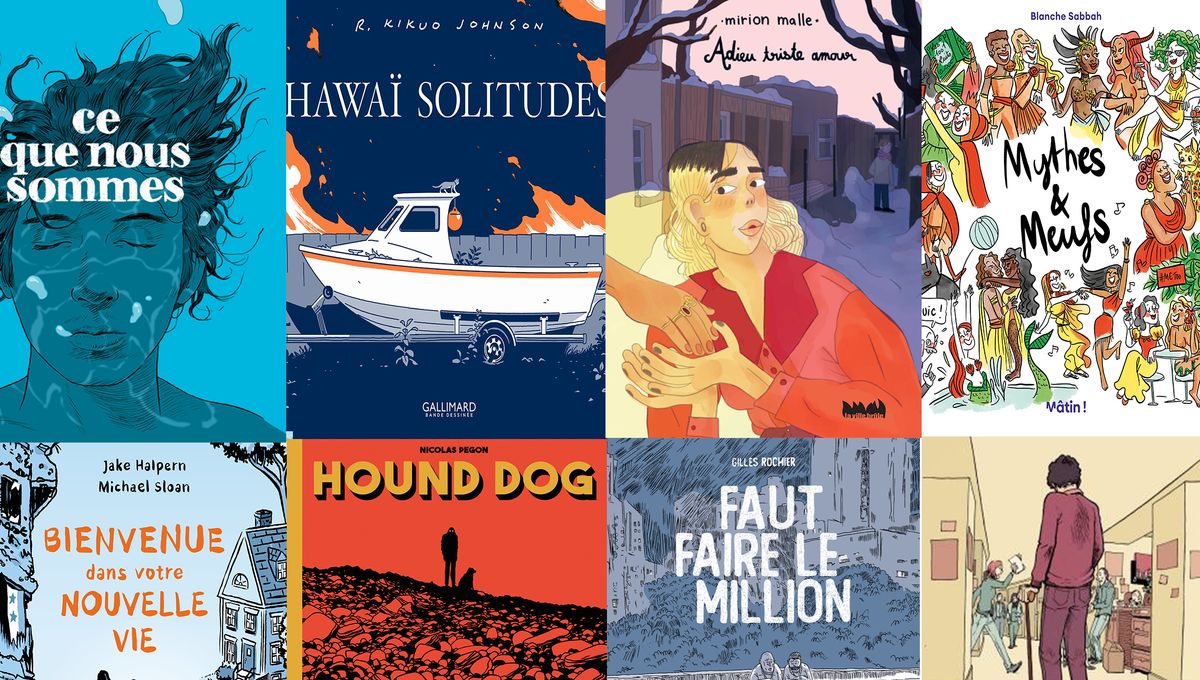 A subtle Hawaiian story, a testimony from a child crime victim, smart and eco-friendly works, feminist maturation, a fake thriller, a courageous reconstruction after a stroke… A selection of comics to discover for the Easter holidays.

A fine and sumptuous drawing serving a deeply human story. In Hawaii, an overwhelmed and depressed single mother takes care of her son and his father as best she can… This dedicated nurse prepares for the doctor’s exam. Her cat disappears. His brother, an unsuccessful musician, arrives… Not much happens in this delicate family story, but the American cartoonist and illustrator at New Yorker R Kikuo Johnson, himself from the Pacific island, manages with his blue minimalist line to take us into his story in a very powerful way. It’s the life he tells, quite simply.

An investigation drawn in the footsteps of those who leave everything behind. The Adabaan family (Ibrahim, Adiba and their five children) first fled Syria for Jordan. One day, she boards a plane for the United States. There, life is complicated. If within three months, they are not integrated (speak English, have a job, children in school…), they could be expelled, and their efforts will have been for nothing. The story hides nothing: the difficulty of everyday life and of adapting to a new culture, anxiety, racism, sometimes disappointment… The supple design full of graphic finds makes the harshness of the experience palpable. This comic strip, adapted from a 2016 report, received the Pulitzer Prize for Cartooning in 2018. A deserved reward.

It is the story of a dog, a “hound dog” (hunting dog) as in the song of Elvis Presley. The lost animal arrives at the home of two losers, César and Alexandre. These inhabitants of an American city go in search of the owner to return the animal to him. A wandering follows, more than a real search. Caesar and Alexander meet a whole series of characters. Between alcohol, video games, and doctor’s appointments, life goes by with little to look forward to.. Thanks to its clear line drawing influenced by animation cinema and the style of the cartoonist Brunö ( Tyler Cross …), Nicolas Pegon takes us on board by recreating a heavy and rainy atmosphere Twin Peaks. Impressive.

Culture “Amalia” by Aude Picault: at the heart of the mental load

In an energetic feature that recalls that of indie cartoonists, Glenn Head recounts the sexual abuse of the director of an American boarding school.

It evokes the influence of the character, and his double discourse. He does not forget the devastating consequences on the victims, of which the cartoonist is a part. He himself will experience alcohol, drugs, relational and sexual difficulties, self-destruction… It is told frankly, with accuracy, even in the denial of those around him who cannot believe that such horror exists.

This testimony in energetic black and white is touching, violent, necessary, but never boring or creepy. A book unfortunately still relevant.

With his drawing close to caricature, mouths in the shape of an “o” and eyes always bulging, Gilles Rochier continues his story in the city he has known since childhood. In this volume, still in blue tones, the tone becomes more serious. A friend is found dead… The designer drags his depression. Through dialogues with friends, he retransmits in a disillusioned tone the history of his district. With self-mockery, and without misery, he restores the talk and concerns of the suburbs, the first of which is the lack of money.

“Must make the million” by Gilles Rochier at Six Feet Under

Turn of a young adult

“Farewell, Sad Love” is the title of a song by Benjamin Biolay and Françoise Hardy, but also the story of a young woman’s change. In Quebec, the author of BD Cléo lives with her boyfriend Thomas. On a chance encounter, she realizes that he may not be who he claims to be. Doubt sets in… We follow the heroine until her sudden decision to change. The design goes straight to the point, and perfectly serves the very feminist purpose.

Ecology and feminism: “Mastin” from the Internet to paper comics

“Mâtin, what a newspaper!” (a nod to the newspaper’s slogan Pilot) has started on Instagram during the first confinement. On this account, it is aboutenvironment and of feminism. It’s always very well done with a tone that oscillates between realism and optimism. Dargaud is now publishing three volumes in hard copy. “Myths and chicks” by Blanche Sabbah, is a tribute to fictional heroines in the form of rehabilitation. In “Ecological procrastination”, Maité Robert makes fun of our great environmental ideals knocked out by our laziness, in a very humorous tone in drawings embellished with photos. And “Plastic tick tock tick” by Capucine Dupuy and Terror Graphique denounces the boom in plastic, and its consequences. Educational and terrifying.

When there’s no more memory

The subject of memory loss preoccupies comic book writers. After the seriesBug” of Enki Bilal, here is the variation around the subject of Zep. In 2113, we will live with an augmented brain, and all our memories, everything we have learned will be in a “databrain center”. But what will happen in the event of failure? One day, a young man has a breakdown… We follow his wanderings. The questions posed by comics are very contemporary. What to do with all stored data? What environmental consequences do they pose? What kind of humans will we become?… SF to think about.

“What We Are” by Zep at Rue de Sèvres

A universal testimony. Bruno Cadène, a senior reporter for France Culture, suffers a stroke… He finds himself aphasic in the hospital. The comic strip recounts the slow reconstruction of the journalist before his return to professional life. Thanks to rehabilitation and the affection of his family, he will regain his speech… Touching.

Reread”Mafalda” always pleases. Glénat republishes a compilation of strips of the famous character of Quino. The selection is resolutely feminist because little Mafalda was.

“Smoke” by Chadia Loueslati and Nina Jacqmin at Marabulles: a mute and very poetic comic strip to gently tell a yet deadly addiction, that of cigarettes.

“Saint-Exupéry, the last flight and other stories” by Hugo Pratt at Casterman… Just for the pleasure of this not-so-improbable drawn marriage between the Italian cartoonist and the French aviator.

“Scarlet Snow, Karmela Krimm Volume 2” by Franck Biancarelli and Lewis Trondheim at the Lombard: women’s whodunnits against the backdrop of Marseille under the snow, and as a detective tool, the mobile phone. Always very well done!

We peck in our youth selection. And we pick from our previous selections: the one before the Angoulême festival, last February, Christmas, October, back to school, this summer, spring, after the 2021 Angoulême Comics Festival…

We look at the drawing lessons given by comic book authors: How did I draw?

Comics: what to read after the Angoulême 2022 festival?