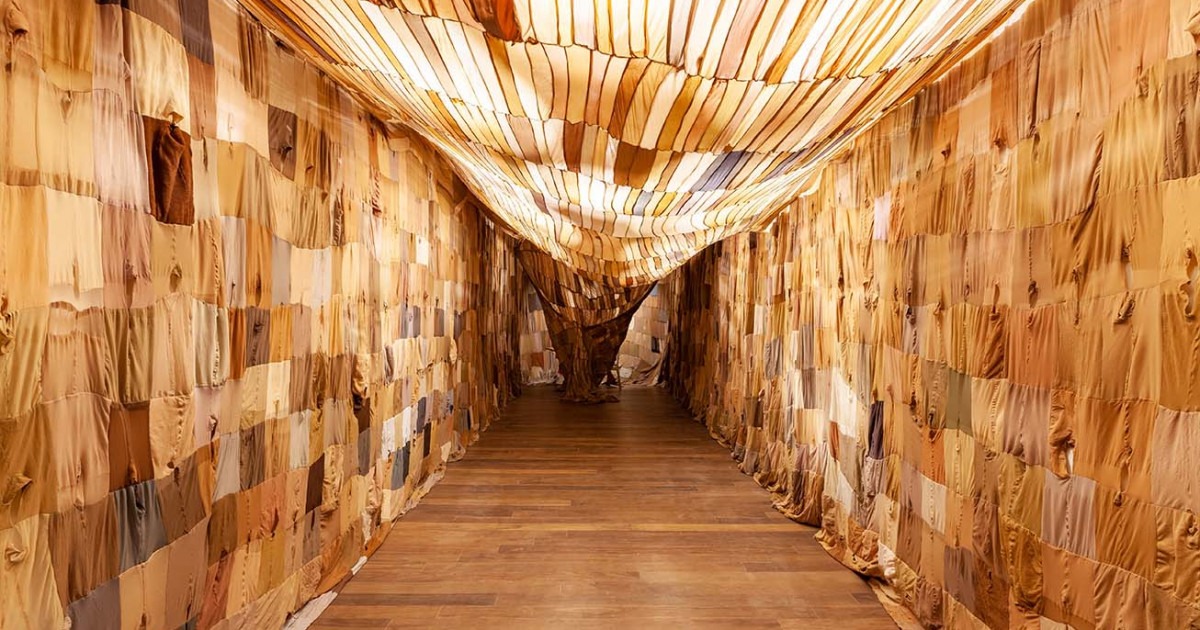 Made of tights, the abstract canvases and installations of the South African visual artist Turiya Magadlela denounce systemic racial and gender violence.

It is a huge red and pink arch that we take at the end of the course. Two hundred square meters of tights cut and sewn together, like 19th century African-American quilts or the Patchwork of Names, a commemorative quilt for AIDS victims, started in 1987. Turiya Magadlela did not embroider it alone: ​​to Soweto, the township where she lives with her five children, the women of her community have lent her a hand. Collective therefore, the work was the obvious way out of the exhibition “Ubuntu, a lucid dream” at the Palace of Tokyo, which broadcasts this “ acting thought » combining humanity and reciprocity: « This vault that must be crossed to leave the premises leads to another way of being in the world, a possible common predicts curator Marie-Ann Yemsi. Its title, Mashadi Would Say II, is taken from a poem by the artist’s mother, found in a drawer. It also refers to the fight of the South African Oshadi Jane Mangena (1931-2015), nurse and anti-apartheid activist, engaged on her return from exile for the rights of women and vulnerable people.

Magadlela finds in the colonial history, never past, and the female condition, food for thought: tights therefore, underwear ” long reserved for fair skin which she spreads on wooden frames like paint, but also sheets and prisoners’ uniforms. So many textiles that archive the violence done to the body. ” All of Turiya’s work is about this physicality “says Marie-Ann Yemsi. Usually allusive, its meaning is sometimes explicit: thus Yes, it was definitely on twitter where I saw a mutilated vagina from the Serie Inequities (2021), where brown and gray nylon stockings sewn with red thread are close to cracking.

1999-2001
Studied fine arts at the University of Johannesburg.

2013-2014
Continues his training at the Rijksakademie in Amsterdam.

2017
Participates in the exhibitions “Blue Black” at the Pulitzer Arts Foundation in Saint-Louis, “The Past is Present” at the Jack Shainman Gallery in New York, and “The days that come” at La Galerie des Galeries in Paris.

2018
Finalist of the Jean-François Prat Prize.

2019
Istanbul Biennial and “Material Insanity” exhibition at MACAAL in Marrakech.

Contemporary art: the textile art of Turiya Magadlela, a weapon against racist and sexist violence | Knowledge of the Arts