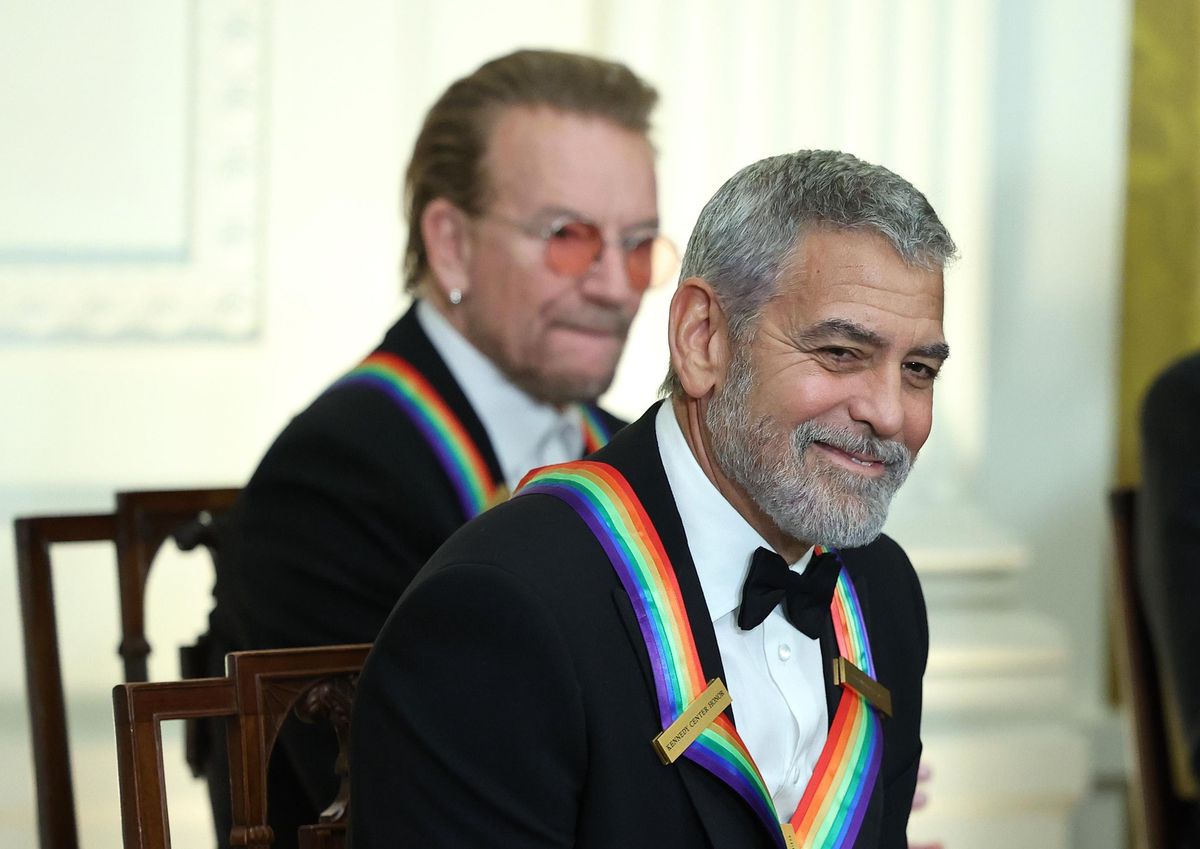 Cultural Prize: George Clooney and U2 honored by the Kennedy Center

The Kennedy Center, Washington’s most prestigious cultural award, was presented Sunday evening in the presence of the American president himself.

George Clooney and the Irish rock group U2 are among the personalities who received the honors of the Kennedy Center, the most prestigious cultural award in Washington, on Sunday, in the presence of Joe Biden.

A host of Hollywood stars and all of Washington also celebrated the careers of soul great Gladys Knight, Cuban-born bandleader and songwriter Tania Leon, and evangelical gospel singer Amy Grant, at this gala evening of which this is the 45th edition.

Joe Biden and his wife Jill, as well as Vice President Kamala Harris and her husband Douglas Emhoff, attended this prestigious evening in the great cultural center of the American capital, which ex-President Donald Trump, very unpopular in the world of American culture, had shunned throughout his tenure.

A string of celebrities took to the Kennedy Center stage to pay their respects to those honored on Sunday, previously invited to a private White House reception with the Bidens and a few hand-picked guests, the day after a dinner party. honor Saturday evening at the State Department, in the presence of the head of American diplomacy Antony Blinken. The show will air on all major US channels on December 28.

The Oscar-winning actor George Clooney, 61, and his wife Amal, a lawyer specializing in the defense of human rights, were particularly expected this year on the red carpet. Star of the film “Ocean’s Eleven” and “Batman and Robin”, who also directed and produced several films, he said he was honored to receive this tribute.

The actor arrived on the arm of his wife who caused a sensation in a dress all in sparkling silver. “I, who grew up in a small town in Kentucky, never imagined that I would one day be seated on the Honors balcony of the Kennedy Center,” he previously said in a press release. “To be mentioned alongside the rest of these incredible artists is an honor.”

“You must be someone really special in the arts, Mr. Clooney,” said Big Bird, icon of the famous Sesame Street show, also honored by the Kennedy Center, and who introduced the program dedicated to the arts. actor.

Julia Roberts, wearing a dress decorated with photos of her longtime friend George Clooney, called it “the best combination of gentleman and playmate.” “Not only is he beautiful and talented in every area he chooses to approach, but he is also deeply present and attentive to the world around him,” said the actress.

The singer Eddie Vedder of Pearl Jam sang “Elevation”, one of the hits of the Irish group U2, another distinguished guest of this evening.

Ukrainian singer Jamala joined American singer Brandi Carlile and Irish musician Hozier to sing ‘Walk On’, another U2 hit, in support of Ukraine.

Singer and philanthropist Bono and his group U2, which have sold 170 million albums worldwide, are honored for legendary titles like “Sunday Bloody Sunday”, “Desire” and “With or without you”.

Sacha Baron Cohen found his character Borat on stage to also pay tribute to the Irish group, with his fierce humor which sparked laughter and a few raised eyebrows in the audience.

Nicknamed “the Empress of Soul”, Gladys Knight, 78, said she was “infinitely touched”, judging “unparalleled” the Kennedy Center’s commitment to art.

Winner of the Pulitzer Prize for Music for her opera “Stride,” Tania Leon, 79, known for her innovative and powerful compositions, welcomed the Kennedy Center’s recognition of different types of classical music.

The first Christian music star to be recognized by the Kennedy Center, Amy Grant, 62, said that “never in (her) wildest dreams” had she thought she would receive the award. “Over the years I have seen many of my heroes celebrated by their fellow artists,” she added in a statement. “Thank you for widening the circle for all of us.”

Cultural award: George Clooney and U2 honored by the Kennedy Center