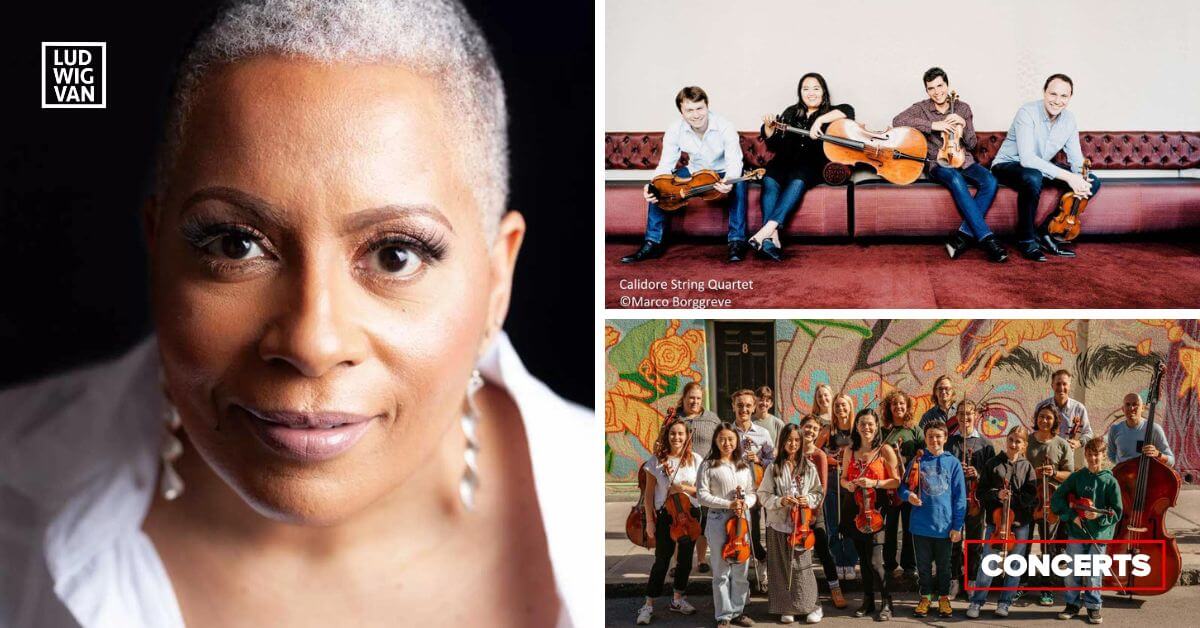 This week, classical music meets popular music and jazz with concerts bringing together the OSM and the Cowboys Fringants, or the Orchester Métropolitain and singers Mélissa Bédard and Kim Richardson. Here are our Editors’ Picks from November 28 to December 5, 2022.

Les Cowboys Fringants are back on stage at the Maison Symphonique. Under the direction of Simon Leclerc, you will be able to sing along to the group’s best-known tunes.

For the holidays, singers Mélissa Bédard and Kim Richardson join the Orchester Métropolitain under the direction of Yannick Nézet-Séguin in jazz arrangements of festive tunes.

An evening in Vienna with the Ensemble Dialoghi

This concert will be an opportunity to hear the clarinet of love, a rarely heard instrument. Cristina Esclapez (pianoforte), Andréanne Brisson Paquin (soprano) and Lorenzo Coppola (clarinet) will perform works from the Viennese classical tradition. The evening will begin with Six German Lieder by Spohr, followed by Lieder by Schubert, the Piano Sonata No. 60 and Fidelity by Haydn. The concert will end on Abendempfindun and Mozart’s Sonata for clarinet d’amore.

The Studio de Musique Ancienne de Montréal will present eight vocal works by the German composer Heinrich Schütz, Bach’s predecessor, recognized for his qualities as a teacher and for his compositions adapting Italian forms to the German language.

Historic Chapel of the Good Shepherd

The Cobalt Quartet at the Historic Chapel of the Good Shepherd

For their first concert as part of their residency at the Chapelle Historique du Bon-Pasteur, the Quatuor Cobalt offers a concert in collaboration with harpist Valérie Milot and Marie-Ève ​​Trudel on narration. Together, they will interpret the Fantastic tale for quartet and harp by André Caplet as well as two works by Debussy.

Presented as a world premiere, Unruly Sun is a cycle of songs, sung in English, and accompanied by six musicians, inspired by the life of director and queer activist Derek Jarman as well as his popular memoirs, Modern Nature.

Across 19 songs, the work pays homage to Jarman as an artist and a person living with AIDS, and chronicles the work that went into creating his garden at Prospect Cottage, a fisherman’s cottage on the arid South West Coast. from England.

This project was born out of a joint commission from Brott Opera (Hamilton) and the 21C Festival (Toronto). Unruly Sun is a creation of Canadian composer Matthew Ricketts, and renowned American librettist, Mark Campbell, whose operas have received both a Pulitzer Prize for Music and a GRAMMY Prize.

Pianist Meagan Milatz will perform key works from the romantic repertoire. On the program: Schubert’s Musical Moment n°3Kreisleriana by Schuman, The Campanella of Liszt and Prelude and Nocturne for Scriabin’s left hand.

Festival Vibrations at the University of Montreal

For the second concert of the season, the Big Band of the Université de Montréal invites Dave Holland, a British bassist who has collaborated with Mile Davis, Betty Carter, Chick Corea, Herbie Hancock, Steve Coleman and Stan Getz.

Professors from the University of Montreal

The Contemporary Music Ensemble and the New Modern Ensemble

The Contemporary Music Ensemble of the University of Montreal and the musicians of the Nouvel Ensemble Moderne come together in a free concert under the direction of Jean-Michaël Lavoie and Lorraine Vaillancourt. On the program, works by Keiko Devaux, Xenakis, Alithéa Ripoll and Romitelli.

The Opus Project offers a free concert at St. Stanislas Church in Kostka. Join Joanna Marsden on the transverse flute, Noémy Gagnon-Lafrenais on the baroque violin, Margaret Little on the viola da gamba and Christophe Gauthier on the harpsichord in Bach’s L’Offrande Musicale.

The Calidore Quartet, founded in 2010 by Jeffrey Myers and Ryan Meehan on violin, Jeremy Bery on viola and Estelle Choi on cello, won the most important distinction for a chamber music ensemble: the grand prize for the inaugural edition of the M-Prize International Chamber Music Competition for an amount of $100,000. Find them for their third concert at the Ladies’ Morning Musical Club with works by Mozart, Widmann and Smetana.

For their Christmas concert, Les petits violons invites Olivier Arseneault, jigger and percussionist. On the program: Symphony in B flat major by Carl Philipp Emanuel Bach, Four excerpts from Gyermekeknek by Béla Bartók, Etude No. 13 by Federigo Fiorillo orchestrated by Jean Cousineau, Christmas tunes and folklore by Jean Cousineau.

Subscribe to our newsletter! Classical music and opera in 5 minutes, every day HERE

Collaborator at the house of Ludwig Van

After completing a bachelor’s degree in psychology and a DESS in music mediation, Margot Charignon is pursuing her master’s studies in sociomusicology at the University of Montreal. Alongside her studies, Margot holds a position as an intern in cultural mediation at the Festival de Lanaudière. She also writes reviews for L’Opéra – Revue québécoise d’art lyrique.

The latest articles by Margot Charignon (see everything)