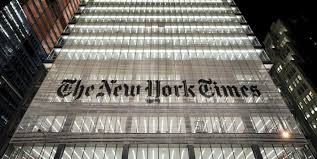 On Golnadel.tv, “The WebTV that fights Islamo-leftism” by media lawyer and without language of wood, William Goldnadel, this one returns at length, in one of his last interventions on the file published in “Tribune Juive” and titled “The lynching of Israel by Le Monde” – I had the honor to participate: https://goldnadel.tv/media/lisez-le-dossier-accablant-de-tribune-juive-sur-le

He explains the objective reasons for this, mentions some of the authors (one of whom he knows better than the others), speaks of these anti-Zionist Jews weighing all their weight in the editorial line of the evening daily, then of this fatal gentleman Barthe and his wife, before discussing this kind of filiation with one of the reference daily newspapers in the USA, the “New York Times”.

On this last point, he tells us about the Director of the daily for 26 years (from 1935 to 1961) and his deleterious role in the situation of European Jews, despite his Jewish origins.

I confess that I did not know this Arthur Hays Sulzberger and, as a concerned and often dismayed former journalist, in search of the truth – which should be the raison d’être of journalism – I sought to find out more .

Among the main controversies that have targeted the “New York Times”, there is therefore that, before and during the Second World War, of having downplayed the accusations against the Third Reich in the expulsion, hunting and massacre of the Jews. Europeans. Partly, we are told on Wikipedia, because “the publisher of the New York Times, a Jew himself, feared that the newspaper would appear to be biased the jewish cause” (sic).

Died seven years after having stopped working at the “NY Times”, in 1968, Arthur Hays Sulzberger was also one of the administrators of the “Rockefeller Foundation”, from 1939 to 1957. He therefore had “a long arm” and his proximity (one could say his connivance) with American power is not a legend.

Like “Le Monde”, the “NY Times” is nevertheless a reference among daily newspapers. And, in addition to the Sulzberger dynasty, many Jews worked there, at various levels of responsibility and influence.

Nevertheless, the prosecution remains silent on the crimes of the Holocaust, known very early on, such as the one targeting the US administration and the US Department of Defense, as well as the 32th President of the USA Franklin Delano Roosevelt, seems very real.

Re-elected three times, which was not normally provided for by the US constitution, the latter seems to have turned a blind eye to what was happening in Eastern Europe (historians not being 100% in agreement on this point, everyone will have their intimate conviction, even if the doubt always benefits the accused…). In any case, before the outbreak of the Second World War, Roosevelt had denounced the oppression and the Nuremberg Laws. But he said he did not wish to intervene directly in the “internal affairs of Germany” (re-sic).

One thing is certain: he did not put pressure on Congress to increase the reception of Jewish refugees and during the war he clearly did not seek to help the Jews of Europe, considering that the main objective should be crushing of the Nazi regime. Despite pressure from American Jews, his wife Éléonore and American public opinion, the president did not deviate from this position.
Another point of contention among contemporary historians: not everyone agrees on whether or not he was made aware of the American air force’s plans to bomb Auschwitz or the railroads. Still, the idea did not come to him, that’s for sure, when it would have allowed the survival of so many men, women and children…

The constant anti-Semite, disguised as anti-Zionism

Coming back to the NY Times, let’s look, amid a considerable amount of controversy, at those concerning Jews and Israel: they seem varied.

For example, the recommendation of an anti-Semitic book by David Icke in December 2018 as part of the interview with Alice Walker, writer and activist, feminist, black rights and American anti-Zionist calling for a full boycott of Israel “which practices a much more radical apartheid than that practiced in South Africa” (re-re-sic).

Let us recall in passing that Walker is the author of “The Color Purple”, Pulitzer Prize 1983, which gave right to the cinematographic adaptation that we know by… Steven Spielberg.
An Alice Walker who was married for nine years to Melvyn Rosenman Leventhal, a Jewish lawyer and civil rights activist. His exploits and outings, both anti-Zionist and anti-Semitic (surprise who?), number in the dozens. His constancy in taking up David Icke’s anti-Semitic frenzies has never been faulted, since his “release” in the “NY Times”. Like in the spring of 2020, when she relayed a video of said Icke, attributing the responsibility for Covid-19 to the Jews, a bit like at home and several blue white red conspirators around the question “Who?”

As for the other “facts of glory”, if one can say ironically, of the “NY Times”: “the caricature affair” in April 2019. The newspaper indeed publishes in its international edition a cartoon representing a Donald Blind Trump, wearing a yarmulke, holding a guide dog on a leash in the guise of Binyamin Netanyahu, wearing the Star of David around his neck. The editorial staff ended up apologizing on Twitter, the day after publication, citing an “offensive image” and an “error in judgment”. In the aftermath, the “NY Times” announces that it will no longer publish political cartoons in its daily international edition and that it is ending its relationship with two cartoonists under contract.

In short, the “NY Times” today as yesterday seems to have, in spite of its leaders of Jewish origin, a serious penchant for what accuses the Jews and Israel of all the evils, by words… and drawings.

Like “Le Monde” and “its Jews” filled with a fierce hatred of themselves or their ancestors.

But this daily life that we find difficult to imagine as anti-Semitic (in view of those we knew in the 1930s and 1940s, the comparison is not possible), but which we find difficult to feel as simply “anti-Zionist”, this which is often only a very useful cache-sex, when it is necessary to attack what we are here or there…