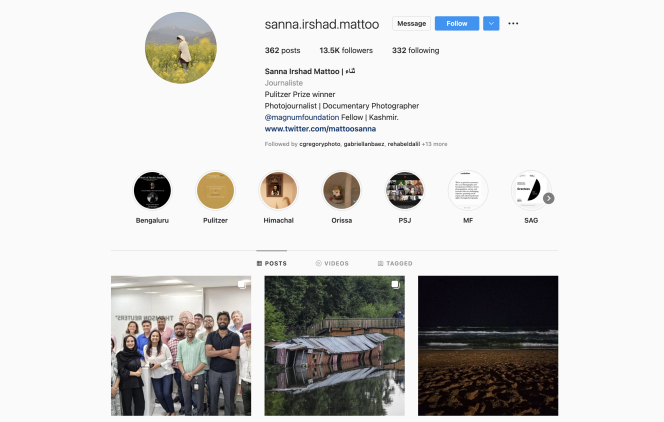 2022 Pulitzer Prize winner Sanna Irshad Mattoo was prevented from boarding a flight to Paris on Saturday July 2. The 28-year-old, originally from Kashmir, was invited to the Arles Photographic Meetings, which take place from July 4 to September 25. His work is exhibited there as part of the Serendipity Arles 2020 scholarship, supported by the French Institute in India.

The Reuters photographer was stopped at Delhi airport despite having a valid visa for France. “A stamp in my passport says my ticket has been canceled and the immigration officers didn’t tell me any more, I was just told I couldn’t travel”she says back in Srinagar.

I was scheduled to travel from Delhi to Paris today for a book launch and photography exhibition as one of 10 award… https://t.co/MaCZsau900

Sanna Irshad Mattoo was banned from leaving Indian Territory at the “request from Jammu and Kashmir Police”, according to a government official, who spoke on condition of anonymity, not being authorized to communicate on the question. Contacted by The world, the Jammu and Kashmir police did not respond. The French Embassy in New Delhi, who nevertheless salutes the presence of Indian artists in Arles in a press release, also declined to comment on the matter.

The Kashmiri photographer is part of the team of Reuters journalists awarded the 2022 Pulitzer Prize in the magazine photography category for their coverage of the coronavirus pandemic in India. Sanna Irshad Mattoo had traveled by pony and on foot to one of the most remote vaccination camps in the country. At about 3,400 meters above sea level, she had taken the photo of a caregiver inoculating a dose of coronavirus vaccine to a shepherd.

“Systematic pattern of harassment against journalists”

Since the revocation of the partial autonomy of Kashmir on August 5, 2019 by the government of Narendra Modi, the noose has tightened on journalists in the region. Several were prevented from taking a flight abroad, in particular to attend conferences or award ceremonies. “Travel bans are part of a systematic pattern of harassment against journalists in Kashmir”regrets the Committee to Protect Journalists, an American organization for the defense of press freedom.

In September 2019, Gowhar Geelani, a journalist from Kashmir, was unable to participate in a training program organized by Deutsche Welle radio in Germany. In October 2019, Bilal Bhat, a Kashmiri journalist and human rights defender, had to give up traveling to Malaysia. In 2021, Zahid Rafiq, a former journalist from the Himalayan region, suffered the same fate, when he was to travel to the United States to teach at Cornell University. The list is non-exhaustive.

You have 34.13% of this article left to read. The following is for subscribers only.

India: a Kashmir photojournalist, winner of the Pulitzer Prize, prevented from traveling to France