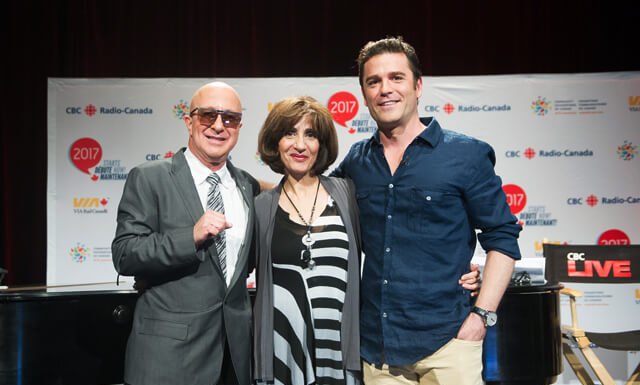 OTTAWA – Cultural journalist and great lover of books, Janine Messadié won the Alain-Thomas award at the last Toronto Book Fair for her Letter to Tahar Ben Jelloun. That ” who has no age” looks back on the highlights of his career, shares his literary favorites with us, in addition to making us think on the state of the world and the future of the French language.

“You were born in Cairo, Egypt. Tell us about your arrival in Canada…

My parents settled in Montreal in 1963 at the time of the exodus of the first Christians under the Nasser government, following the Suez Canal crisis.

I grew up in Montreal, experienced my first winter there and discovered a culture that fascinated me. It was the good old days in Quebec as much for reading as for television. I bathed in La ribouldingue, The box of surprises or Sol and Goblet. All of this built my imagination. We can’t forget it when we grow up. We say to ourselves: “I want to do this later”. These broadcasts Radio Canada amazed me.

Tell us about your beginnings as a journalist…

I was told that I had a beautiful voice and that I should do radio. I went to take courses in journalism and microphone presence at the Promédia school. I embarked on the journalistic path with a radio-Canadian career as a newsreader. I was also a reporter for the immigration column at Montreal tonight.

After my professional debut, I enrolled in French literature at the University of Montreal. I even took a course in creative writing in 1991. I still have my notebooks in my drawers that I use on occasion! I started print media in 1994-95 for the defunct magazine Quebec rock. I then landed in the defunct newspaper To see and theToronto Express.

You have interviewed many great cultural figures of the international Francophonie. What are the three meetings that marked you the most and why?

My most significant meeting was with Claude Léveillé in 1995 when I was working for TV5. He is a great lyricist who told stories but in song. During the interview, he told us about the little wooden horse. He told us that he came from a very modest background, very cold and that one day his parents had to take the wooden horse and burn it to make a fire. He started crying. It was an incredible moment of television, very intimate. We had joined the little boy with this memory. The cameraman zoomed in very slowly on Claude Léveillé’s face so that viewers could capture his emotion. He marked me and remains, in my opinion, one of the greatest lyricists and singers in Quebec.

I would then say Gilbert Bécaud during the show Vision of America. There are two Gilbert Bécauds, the Gilbert and the Bécaud. During the interview, he looked me straight in the eye and said, “You are one hell of a psychologist”. There is the artist on stage and the man in his intimacy that we know little about. We managed to reveal a bit of the man behind the very big star, to touch on the vulnerability of the artist. It is very enriching. This is where there is a real connection, a real encounter.

Finally, Nana Mouskouri. What surprised us both was that we were wearing the same brooch at the time of the interview. It was a click, we said to ourselves that we had the same tastes because we had the same brooch. When we saw each other again, we remembered it. She’s a great artist, a great humility who always has the nerve to go on stage.

You lost your job at the first channel in 2014, following the Harper government’s cuts. How did you get up?

I was unemployed for the first time in my life. I said to myself “Get out your writings” and that’s what I did. I took a writing workshop with Gaston Tremblay, an author and poet, professor emeritus at Laurentian University and one of the founders of the house Prize de parole. I showed him some pages of my manuscript Letter to Tahar Ben Jelloun and he encouraged me to go ahead and present it to the Ontario Arts Council. I followed this path. I weighed anchor from Toronto in 2015, while working under contract for Radio Canada, to come to Ottawa closer to my family.

It took me a while to adapt to Ottawa. It’s a very quiet city compared to Toronto, which is a mini New York for me. In Ottawa, it’s absolute calm. There was boredom before returning to the workplace. I quickly returned as an editor at La Cité des affaires, a branch of La Cité collégiale which takes care of receiving immigrants and referring them to integration programs.

You have moved a lot during your life between Montreal, Toronto and Ottawa. How did you experience the Francophonie in these different contexts?

I didn’t feel the difference living in Toronto because I was working in French. However, I know the struggles of francophones in a minority situation. They are many. I know Gérard Lévesque, the Toronto lawyer who fought so that francophones could have services in their language. I was close to these struggles. By working in French in a minority setting, I helped to ensure the survival of this language.

The French fact continues to evolve. I taught journalism at the La Cité campus in Toronto. But it’s true that we’re not in Quebec, so we sometimes have to deal with rednecks, people who don’t like francophones. I happened to meet one in a taxi with a friend. The driver made us get off because he found us rude to speak French between us, while he spoke English.

The French language will remain alive. There are more and more of us at the Association of French Ontario Authors with authors like Nicole Champeau, Jean Fanny, Mireille Messier, Gabrielle Aussant… I remain optimistic. We are in an English-speaking sea but French persists and signs.

What books have changed your life?

The first book that I loved was Lion by Joseph Kessel. It tells the story of a young girl who fell in love with a lion cub in Kenya, East Africa. This book opens us to another country, to new landscapes.

I really like the essays or the meetings: Open eyes by Marguerite Yourcenar where she answers questions from journalist Mathieu Galey, The Suspended Passion by Marguerite Duras, an interview with della Torre.

I like novels like The road by Cormac McCarthy (2007 Pulitzer Prize), an extremely spare post-apocalyptic story. I also like great authors like Emmanuel Carrière or Jorge Semprun and his book writing or life. Philippe Claudel struck me a lot with Braudec’s report. His writing is extremely fluid, his descriptions of nature and the way he describes suffering came to me.

I like books that give me intensity. Sometimes I read and I put my hand over my mouth so I’m scared because I just read. It’s rare that I take a break from reading. I’m going to swallow the book and then reread it so much it struck me. Sometimes you have to take a break as if you don’t want to finish the book, it’s so well written.

How did you hear about Tahar Ben Jelloun ? Why did you want to write him a letter?

I discovered The sacred night who won the Prix Goncourt. I bathed in the cultural field. This blinding absence of light was a favorite Renaud Bray. When I read this book, I was completely taken in, but then totally. It touched me deeply. I felt immense compassion for his character who will live 18 years in the big black hole of Tazmamart prison. He will repel death thanks to the great strength of his mind, his imagination and his great faith. It’s cruel and it’s based on a true story.

I felt a need to write to the author to tell him why his book had moved me so much. It echoed what a friend of the time told me, an Iraqi filmmaker and political refugee who suffered a lot under the dictatorship of Saddam Hussein. I wanted to draw a parallel between the book and the life of this artist whom I knew intimately who was going through a heartbreak, a deep exile. Their stories were similar in their desire to defy death, the fight against torture, confinement and violence.

I wrote this letter but I don’t expect any response. I used the tools of journalism in writing it, including researching and reading numerous reports on Iraq. The letter turns out to be less important than the creative process which was pleasant, but also demanding. I had to put music and poetry into the words. I am happy that it is received as a poetic essay. Beyond writing this letter to him, I needed to question why the world is going adrift.

What do you mean by “adrift”?

We still have a lot of cruelty today. There is still a lot of war, new wars. Without wanting to go into politics, I question the reasons why we always go to that. Like many, I was horrified by the atrocities suffered by the civilian population in Syria. More than six million people left this magnificent country, of great wealth, today devastated, in ruins.
Many religious and historical sites have been totally destroyed, ransacked or looted. These sites, like those of Iraq, or the Buddhas of Bamiyan in Afghanistan (destroyed by the Taliban in 2001), were listed as World Heritage by UNESCO. It’s as if armed conflicts wanted to erase history, annihilate the vestiges several thousand years old.

How did you experience the pandemic?

I took the opportunity. I love solitude. I need it to find myself. I need silence to write, to create a rhythm, a music in the writing. One has the impression that the planet breathed at that time. We could hear the birds, we could hear more planes in the sky. It was a curious atmosphere. I thought of all the isolated people, I made an effort to call isolated people. One can go crazy if one is not used to solitude.

1976: Start of career at Radio-Canada in Toronto

1996: Coronation at the Gémeau Awards Gala for the program Visions d’Amérique

2014: Job loss as a host on the Espace Musique channel

2016: Settles in Ottawa and writes the manuscript full-time

Every weekend, ONFR+ meets with a player in Francophone or political issues in Ontario and Canada.

Literature and culture with Janine Messadié