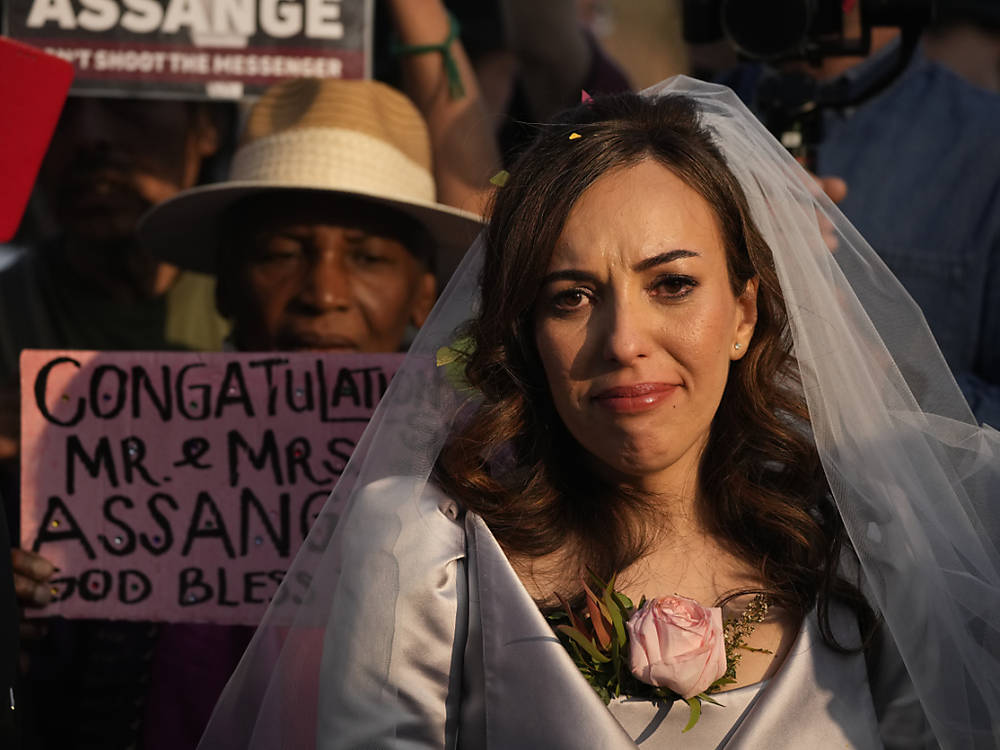 With confetti and cake but behind bars: Julian Assange married his former lawyer Stella Moris on Wednesday at the British high security prison from where he continues to fight against his extradition to the United States.

The union took place in the early afternoon at Belmarsh prison, in south-east London, in a small committee with only four guests and two witnesses, including the two brothers and the father of Julian Assange.

But outside, the atmosphere was festive, the few dozen supporters of the founder of WikiLeaks drinking champagne, dancing or calling on the microphone for his release. A mounted party topped with figurines of the bride and groom, including the white-haired Australian prisoner, had been prepared, and confetti thrown at the bride, who left without her new husband.

‘Thank you’, said Stella Moris after the ceremony, saying she was both ‘happy’ and ‘sad’ because ‘what we are going through is cruel’. ‘He is a most extraordinary person’ and ‘he should be free’, she added.

Caught in a long legal saga, the 50-year-old Australian is wanted by the American justice system, which wants to try him for the dissemination, from 2010, of more than 700,000 classified documents on American military and diplomatic activities, in particular in Iraq and Afghanistan.

Prosecuted in particular under legislation against espionage, he faces 175 years in prison, in a case denounced by human rights organizations as a serious attack on freedom of the press.

Stella Moris arrived wearing a silver gray wedding dress, designed by Vivienne Westwood, and accompanied by the two little boys she had with Julian Assange, in kilts and white shirts. Embroidered on her veil were the words ‘free’, ‘noble’ and ‘tumultuous’. The British designer, very committed to the release of Julian Assange, also designed the kilt worn by the groom – in reference to his Scottish origins.

Among the supporters gathered around the prison, who had hung yellow ribbons saying ‘Journalism is not a crime’ or ‘Free the hostage Assange now’, Londoner Sadia Kokni, 41, considers that the founder of WikiLeaks ‘has only exposed the truth’ and that his detention is a form of ‘slow torture’.

Pulitzer Prize-winning American journalist Chris Hedges has called for an end to ‘injustices’ against Assange, at the center of ‘the most important battle for press freedom of our time’.

Denouncing in the Guardian a ‘political persecution’ and an ‘arbitrary detention’, Stella Moris reproached the prison authorities for having refused the proposed witnesses and the presence of a photographer so that Julian Assange ‘remains invisible to the public eye at all costs , even on her wedding day.

On March 14, Julian Assange saw one of his last hopes of avoiding his extradition disappear, with the refusal of the British Supreme Court to examine his appeal. His partner, a 30-year-old South African lawyer, has since begged British Home Secretary Priti Patel, who is responsible for approving his extradition, to prevent it and put an end to this ‘political affair’.

Julian Assange and Stella Moris first met in 2011, when the lawyer was hired to join the legal team fighting his extradition. Their engagement was announced in November 2021.

Ms Moris had two children with Julian Assange, conceived when he was living at the Ecuadorian embassy in London, where he had taken refuge for seven years until his arrest in April 2019. He then feared extradition to the States United States, or Sweden where he was the subject of rape proceedings since abandoned.

Marriage behind bars for Julian Assange