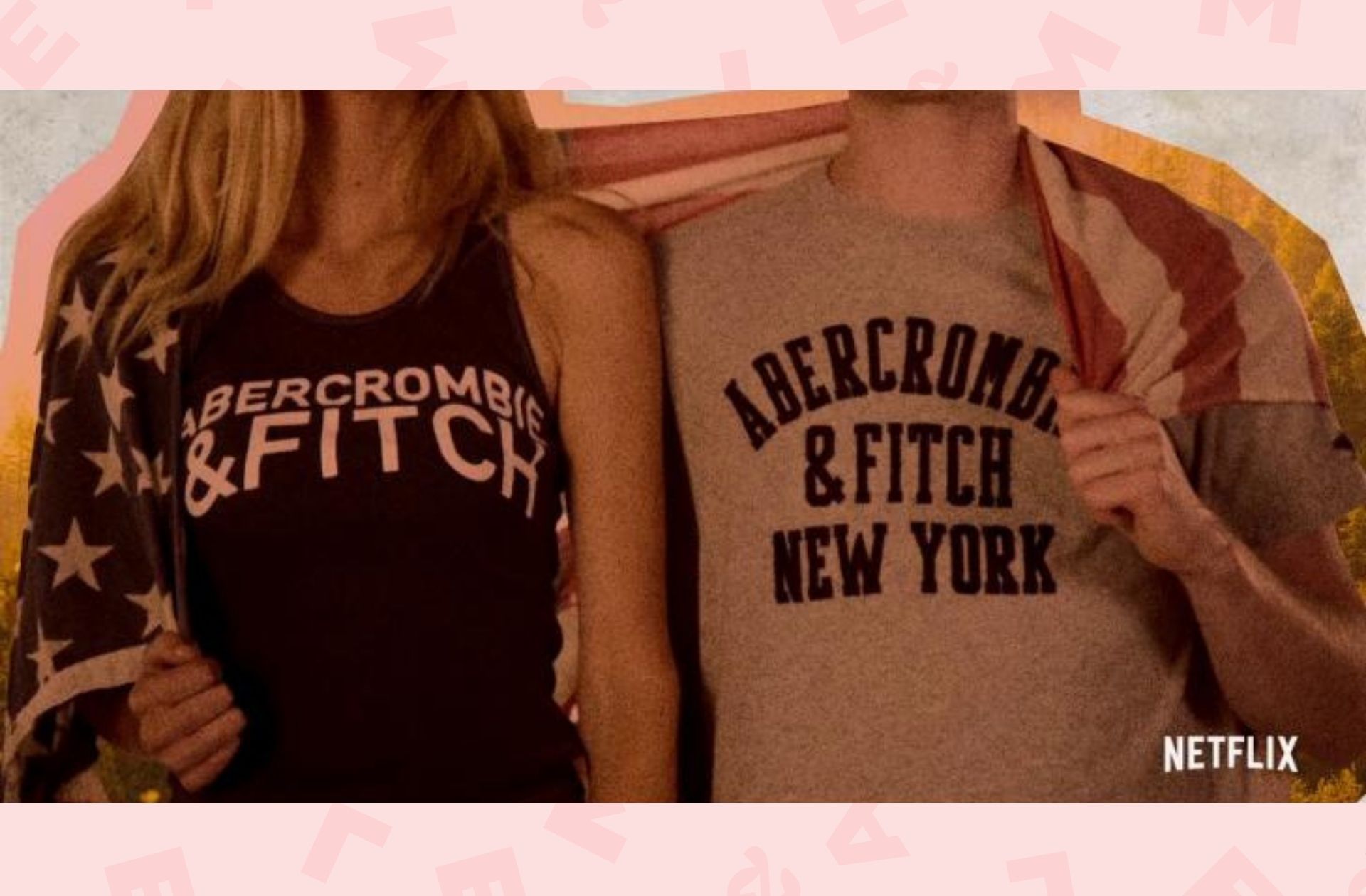 From 1992 to 2014, Mike Jeffries served as CEO of Abercrombie & Fitch, popularizing the brand by excluding non-white, thin, beautiful, and cisteronormed people. This documentary dissects the history of the label and what it tells about America.

I am part of this generation who was in middle school in the 2000s. A period when, among fashionable clothes, there were Abercrombie & Fitch clothes. I remember begging my father to buy me a sweatshirt of this brand worn by the most privileged people of the playground, who had dug up theirs directly in the United States.

I ended up winning my case: an overpriced order on the eshop (since the brand did not yet have any points of sale in France) and a surcharge for customs fees later, I received this which I believed to be the holy grail. But it was just a hoodie that was way too big for me, but too badly cut to look stylish oversized, in a cheap cotton and polyester blend that was pre-worn in places.

This disappointment served as a trigger for me to finally understand how much Abercrombie & Fitch had only ever sold an image of cool and sexy rather than clothes that weren’t interesting anyway. And that’s what dutifully dissects a new netflix documentary, White Hot: The Rise & Fall of Abercrombie & Fitchreleased on April 19, 2022 on the platform.

Watch the documentary White Hot: The Rise & Fall of Abercrombie & Fitch on Netflix


Abercrombrie & Fitch, or perpetual high school and its race for popularity at all costs

The documentary crosses the testimonies of people formerly employed, but also of activists who fought against the worst discriminatory policies of the brand which assumed them completely of 1992 to 2014, under the reign of Michael Stanton “Mike” Jeffries, then CEO.

Result a chilling fresco of the history of the brand which has made exclusion its identity. And therefore what A&F says about our Western societies, capable of reproducing ad vitam aeternam the dynamics of popular versus unpopular people in the high school playground. But who wants to spend their life in high school if not the bullies and cool kid?

By the way, what was Abercrombie & Fitch, and where did it come from?

Founded in 1892 by David Thomas Abercrombie and Ezra Hasbrouck Fitch, this brand aims to be typically American, and initially targets the male elite by offering outdoor sports clothing (shotguns, fishing rods, and other camping tents). camping).

A commercial genius, Leslie Wexner (notably at the head of Victoria’s Secret and Bath & Body Works which were a hit at the time) bought it in 1988 and placed Mike Jeffries there as CEO in 1992 to initiate Abercrombie’s image change. & Fitch. This is where the cool and sexy aura of the brand begins, which actually hides hypersexualizing, cisteronormative, grossophobic, and racist corporate policies.

Still, it was easy to see just by looking at the shops. Anyone who has ever come across one cannot forget it. There are no windows, but wooden shutters which suggest that‘it’s dark inside, with loud music playing.

Shirtless vendor-models crane their feet at the entrance to both charm and intimidate. And when you come in, a smell of musk (for sale, since it’s the perfume proudwhose bottom of the bottle is decorated with the bare torso of an adonis) grabs the nose while you can’t hear yourself speak and can barely make out the clothes.

Because A&F may be a clothing store, it’s above all an atmosphere that we sell, the lifestyle that a white, beautiful, thin, cishetero, rich, and popular person would have. And it is only this kind of people that the brand (which did not go beyond the XL anyway) wishes to hire throughout the presidency of Mike Jeffries.

Be beautiful, Aryan and shut up

If you didn’t meet his Aryan criteria, whatever your skills, you had little chance of being hired, and were relegated to work in reserve, so that the customers would see you as little as possible. Let’s not even talk about the opportunity to rise in the hierarchy of this company then proudly eugenicist.

A journalist, Moe Tkacik (present in the Netflix documentary) still publishes a survey of the wall street journal on these discriminatory HR policies, causing a scandal which leads in particular to the hiring of a Chief Diversity Officer (also present in the documentary) responsible for implementing more diversity in the company so delighted to favor white people.

Because Mike Jeffries fully assumes it, as the journalist Benoit Denizet-Lewis (also present in the documentary) writes in a major portrait article in the history of the brandpublished in 2006:

” When it comes to Jeffries, unattractive, overweight, or undesirable American teens can shop elsewhere. “In every school, there are cool and popular kids, and then there are not-so-cool kids,” he says. “Honestly, we’re looking for the cool kids. We are looking for attractive American kid with a good attitude and lots of friends. A lot of people don’t belong [à nos vêtements]and they cannot be part of it.

Are we exclusive? Absolutely. These troubled companies try to target everyone: young, old, fat, skinny. But then you go completely vanilla. You don’t alienate anyone, but you don’t excite anyone either. »

Boycott calls, demonstrations and petitions are not enough to change A&F

If today such remarks would immediately cause a scandal, this was not the case in the pre-social media era. A&F had already been pinned down several times for t-shirts adorned with racist remarks. But since the demonstrations and calls for a boycott from 2002 mainly mobilized people of color, it was all good for the label, which did not want this clientele anyway.

Except that in 2013, based on these revolting remarks, the activist Benjamin O’Keefe launched a petition against the brand to demand an apology and changes in company policies. And thanks to the viral power of Twitter, the brand is committed to (trying to) change.

The advent of social networks, where minority people could not be silenced any longer, greatly contributed to the cracking of Abercrombie & Fitch’s image. Other scandals followed, such as a job discrimination lawsuit against a woman who wore a headscarf, Samantha Elauf, that went all the way to the Supreme Court where A&F ended up losing.

The #MeToo movement has driven home the point, particularly against Bruce Weber, the photographer responsible for the brand’s hypersexualized imagery. So sexy that she would surely be censored on Instagram today, and would need to open an OnlyFans, laughs Savas Abadsidis, former editor-in-chief of the quarterly magazine of A&F, in the documentary.

The great photographer Bruce Weber has been accused of sexual violence by several models of the brand, through an investigation of NY Times published in 2018. He was not found guilty, settling out of court by checks for undisclosed amounts the plaintiffs who had told the strange ” breathing exercises to which the photographer subjected them.

Outlining the ongoing image change of the brand, now headed by Fran Horowitz who wants it to be more inclusive, the documentary therefore manages to summarize the last twenty years of the brand’s history with dynamism. A period before social networks, during which only magazines, shopping malls and television dictated trends in a much more vertical relationship.

A documentary indicative of an excluding culture, not so bygone

If the quality of the speakers, always face-cam, proves to be unequal, this gives this documentary without voice-over but a few archive images of the mark moments of lightness in the midst of these twenty years of discomfort. The analyzes of Robin Givhan, journalist at the washington post (and the only fashion critic in history to receive the Pulitzer Critics’ Prize in 2006, which makes her all the more my idol). She summarizes in particular in the documentary:

“Fashion is an industry known for doing little market research. Because her goal is not to sell people what they want, but to make them want what she sells. […]

A&F’s history is essentially an incredible indicator of where our culture was 10 years ago. It was a culture that enthusiastically embraced a very WASP view of the world. A culture that defined beauty as necessarily thin, white and young. A culture that was happy to exclude people. »

Too bad but hardly surprising: neither Mike Jeffries nor Bruce Weber wanted to take part in White Hot: The Rise & Fall of Abercrombie & Fitch. So this sums up nicely how A&F didn’t invent contempt for class, race, and size; the brand has simply packaged it well for almost twenty years, making exclusion its identity. But at what cost ?

Watch the documentary White Hot: The Rise & Fall of Abercrombie & Fitch on Netflix