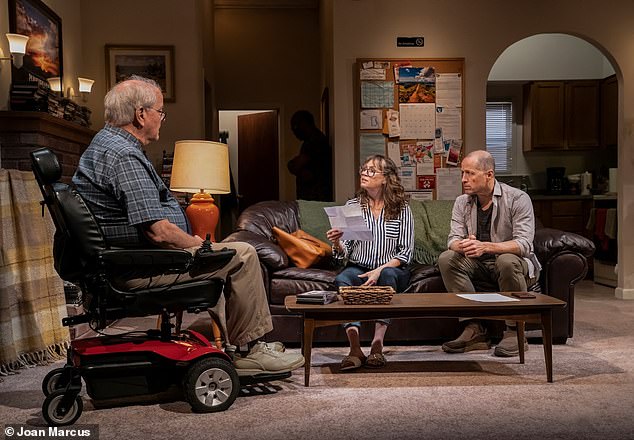 The reviews are there for Downstate, a play that questions the societal punishment meted out to pedophiles after incarceration, and they are positive.

The play centers on a group in southern Illinois, in which a group of four men, each a registered sex offender who has abused at least one child, live menial existences.

According to a large handful of critics from the country’s top media, the work is an uncomfortable triumph of Norris who “wants to make you sit in discomfort for as long as possible and see what lies on the other side,” according to Jackson McHenry. from New York Magazine and Vulture.

The Washington Post’s chief theater critic Peter Marks called the play “brilliant”, writing, “[Norris] wonders how much compassion society should fairly accord to those who have served time for sexual abuse, assault or rape.

In the review, Marks says the award-winning playwright plays with the position that “the punishments inflicted on some pedophiles are so harsh and relentless as to be inhuman”.

Downstate – a play by Bruce Norris about four convicted pedophiles living together in Illinois. The show is currently running Off-Broadway 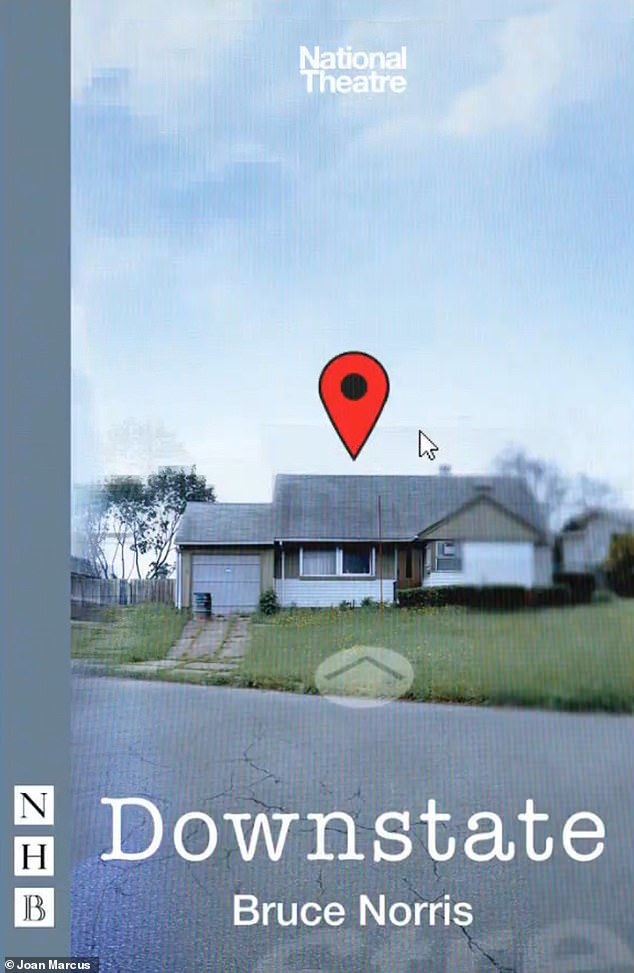 The play revolves around a central theme of mercy for formerly incarcerated sex offenders who live out their days in a rundown group home, working menial jobs. 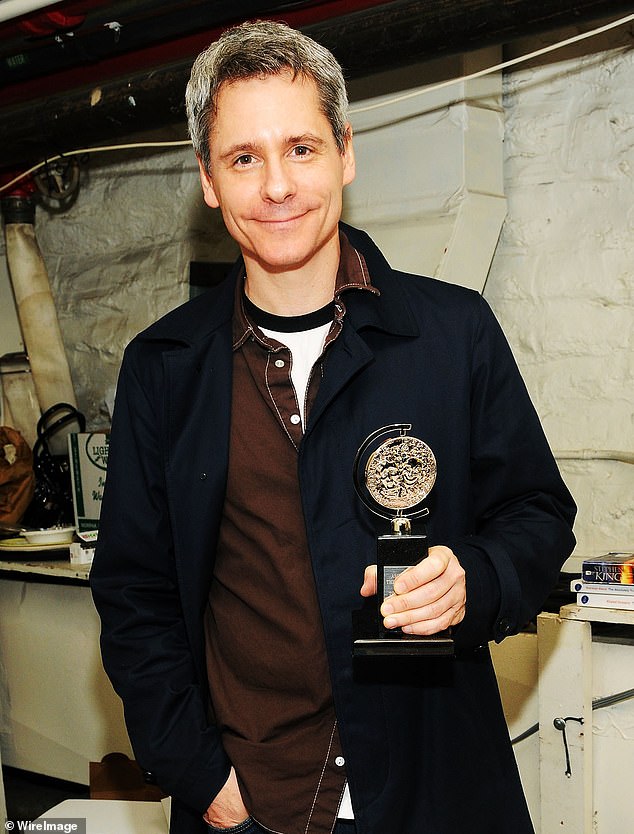 Norris, posed here with a Tony Award for his play Clybourne Park, also won a Pulitzer Prize for the play which confronts themes of race relations and gentrification in Chicago

Reviews from reviews that cater to the nation’s elite theatrical populace have been careful to mask applause for the intricate work in language that largely avoids outright praise for the controversial stage work.

Peter Marks of The Washington Post wrote that after learning the details of the crime each criminal committed, “we are actually being asked to judge for ourselves the extent of the continued torment each deserves.”

He goes on to say that Norris does not “downplay” the horrifying nature of his characters’ sex crimes, nor, however, does he “turn the play into a referendum on the revulsion of their behavior.”

Included in this repulsion is the behavior of Félix, the most reserved of the group, who tries to contact his 15-year-old daughter, which is explicitly forbidden because he sexually abused her as a child.

The assault is depicted in graphic terms on stage, and the attempted contact leads to a heated confrontation with the band’s parole officer, Ivy.

One character in particular, Fred, described as “a harrowing, white-haired man in the ’70s” is repeatedly portrayed as unnervingly charming over his crimes.

The character is a former piano teacher who raped an underage student and was sent to prison where he was attacked, leaving him in a wheelchair.

During the play, Fred is confronted by his former student Andy, who critics reveal is annoying and titled, creating the uncomfortable emotional juxtaposition of a jolly old musician, who happens to be a rapist, and an unsympathetic financier. from the big city. , who happens to be a victim of rape.

These sorts of tensions dominate the play and leave the audience struggling with “mercy questions” long after they leave the theater. 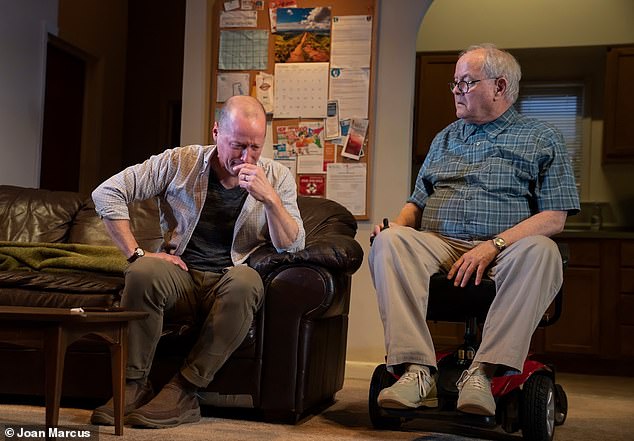 Fred (right), played by Francis Guinan, is a former piano teacher who raped his young male students. He is now a heartbreaking old man in a wheelchair who is confronted in Andy’s play (left), played by Tom Hopper, one of his victims 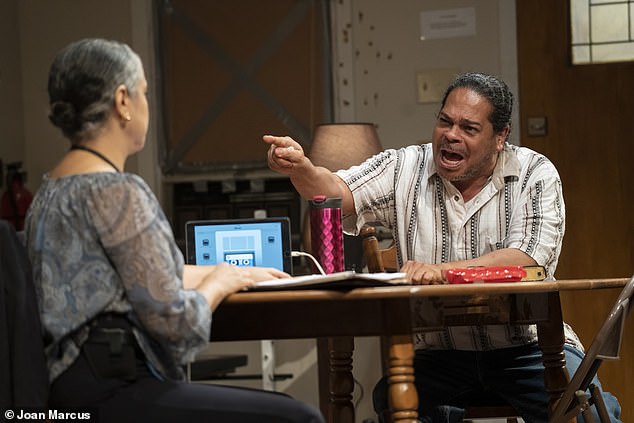 The play also features Eddie Torres as Felix, a mechanic who molested his daughter as a child, who finds himself in a nasty confrontation with the house probation officer, played by Susanna Guzmán. 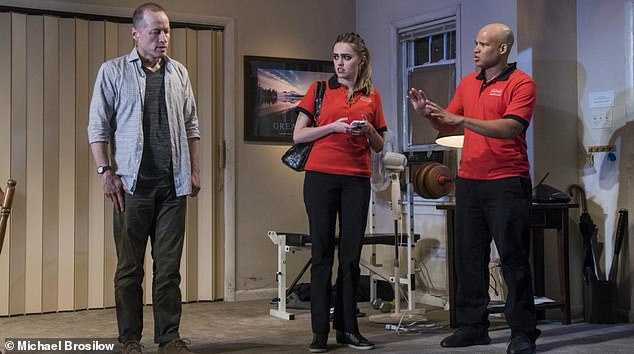 The piece, which originally premiered pre-COVID at Steppenwolf in Chicago, was chosen by The New York Times as a Critics’ Choice 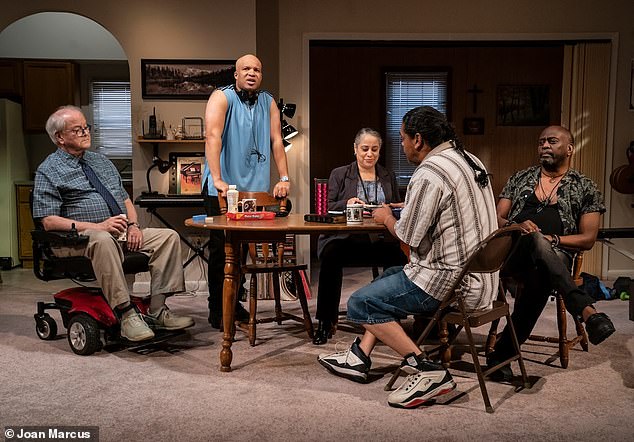 Laura Collins-Hughes of The New York Times, who selected Downstate as its ‘Critic’s Pick’, wrote that the show’s ‘tension’ seeps into your limbs, settles firmly in your solar plexus and never leaves. not ” .

The play, she writes, weighs the “thought of all the damage these men have caused” against the “severity of their exile”.

‘How much recompense is enough? And how much compassion—given to whom—is too much? she wonders, after praising direction and starring in Downstate.

In the post, Marks concludes his review by writing, “Downstate” is proof positive that you can love a room that turns you upside down.