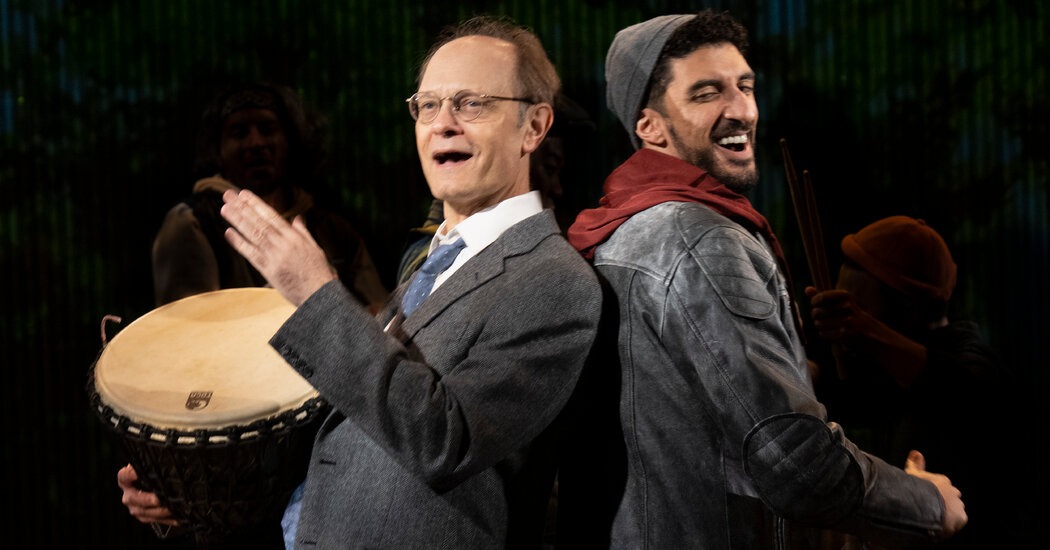 What comes to your mind when you think of immigration, ICE and deportation? I’m willing to bet more than a few George Washingtons that it’s not “musical”. It might be doable to stick to the politics around these issues and immigrants trying to build a life in America in this format, but it’s difficult. This is why the new musical “The Visitor” seems so obtuse and powerless.

Dated because it’s based on Tom McCarthy’s 2008 film, a well-meaning post-9/11 artifact about an undocumented immigrant couple helping a middle-aged white professor come back to life. The film resonated before we had a president who fought hard to keep immigrants out, and before calls for diversity resonated in our institutions.

In the film, an economics professor by the name of Walter Vale travels to New York City from Connecticut to attend a conference, but there he finds a young couple living in his long neglected apartment: Tarek, a native drummer. from Syria, and Zainab, a Senegalese jewelry designer. He lets them stay and Tarek teaches him the drums. They live there until Tarek is unjustly arrested by the police for an offense he did not commit and placed in a detention center for undocumented migrants.

The musical, which premiered Thursday at the Public Theater, is directed by Daniel Sullivan and features a book by Kwame Kwei-Armah and Brian Yorkey, who also wrote the lyrics. Tom Kitt (who also teamed up with Yorkey for Pulitzer Prize-winning “Next to Normal,”) adds music to this story, which arrives on stage with only minor changes.

Long in preparation, “The Visitor” was to begin its performances in March 2020 – almost a century ago in times of pandemic. Staging the project now without a bigger story overhaul was a bold choice, especially with the masking and quarantining coinciding with a reckoning on how people of color and their stories are – or, more. often, are not – represented in theater and the arts.

This does not mean that there have been no changes. First, previews were pushed back by a week to last month after cast raised concerns about portrayals of race and portrayal. Next, the departure of one of the lead actors, Ari’el Stachel, was announced in what the theater called “a mutual decision,” and last-minute changes were made in an attempt to reshape the way the whiteness was centered in production.

David Hyde Pierce plays Walter, a widower whose career and emotional life stagnate like a glass of lukewarm milk. Ahmad Maksoud, who was Stachel’s understudy, takes on the charming Tarek, and Alysha Deslorieux is the firm and guarded Zainab. Jacqueline Antaramian completes the central cast in the role of Mouna, the worried mother of Tarek.

Hyde Pierce delivers the more subdued version of his usual goofy nebbish with the occasional cantankerous banter. (“Wake up, little snot rags,” he thinks as he teaches his students in an opening scene.) But there isn’t much setup for Walter; perhaps intentionally, given how much the series focuses on its white protagonist.

Not all news on the site expresses the point of view of the site, but we transmit this news automatically and translate it through programmatic technology on the site and not from a human editor.

Review: ‘The Visitor’ is late on time E! News UK