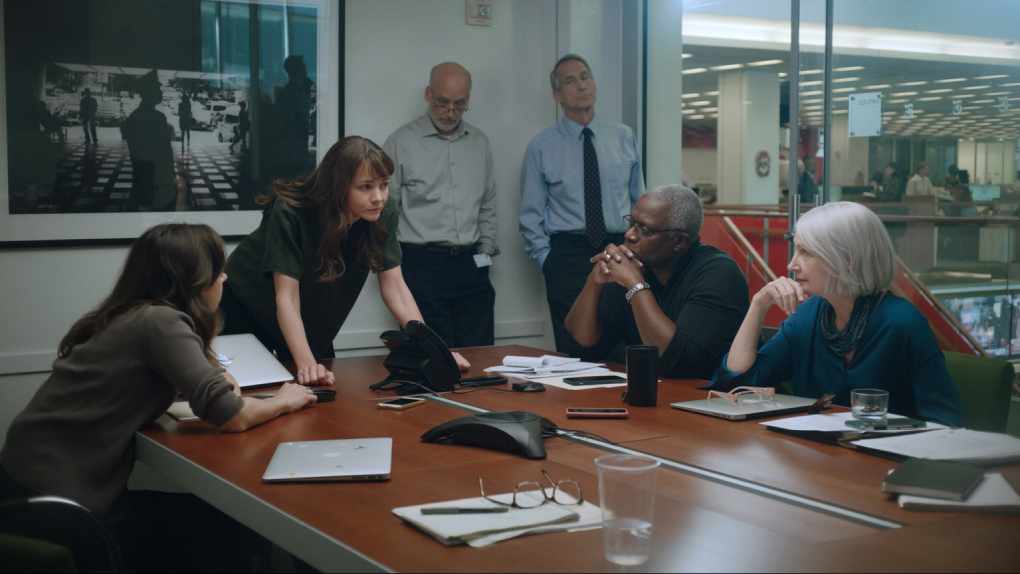 “She Said”, behind the scenes of the Weinstein affair investigation, was released in cinemas. On this occasion, here are five things to know about this film.

She Said by Maria Schrader

What is it about ? Two journalists from the New York Times, Megan Twohey and Jodi Kantor, have together brought to light one of the most important scandals of their generation. At the origin of the #Metoo movement, their investigation broke decades of silence around the problem of sexual assault in Hollywood cinema, forever changing American society and the world of culture.

Ashley Judd as herself

Ashley Judd, having previously refused the sexual advances of Harvey Weinstein, is the most famous celebrity who agreed to help Megan Twohey and Jodi Kantor’s investigation in 2017. The actress’s decision to speak publicly helped to persuade many other women to imitate her by bearing witness. Once the script for She Said was completed and the production of the film launched, Ashley Judd was contacted to play her own role, which she accepted.

She Said is adapted from the investigative book of the same name co-written by New York Times reporters Jodi Kantor and Megan Twohey (played by Carey Mulligan and Zoe Kazan). In October 2017, they published a report on the actions of Harvey Weinstein, in which more than 80 women accuse the producer of abuse or sexual assault (this investigation is at the origin of the #MeToo movement).

In 2018, their work was recognized with the Pulitzer Prize for Public Service. The following year, Twohey and Kantor published the work She said: the underside of the investigation which revealed the Weinstein affair.

She Said is directed by Maria Schrader, whose latest feature, the SF romantic comedy I’m Your Man, was also released in 2022. She also directed the four episodes of the Unorthodox miniseries, adapted from the autobiography Unorthodox: How I caused a scandal by rejecting my Hasidic origins by Deborah Feldman. The filmmaker says:

“The consequences of this article and the movement it has initiated have been enormous. Of course, there are the obvious changes: the way studios, film festivals have made efforts, especially in terms of diversity and inclusiveness, which is very encouraging and causes opportunity. But these changes go far beyond Hollywood.”

“Perhaps the most significant change is the way in which men, as much as women, are beginning to look differently at their personal relationship to sexual harassment or abuse. It is at this much more intimate level that the change was really consistent, I think. We are more free now to share our experiences.”

Harvey Weinstein only appears from behind (played by a certain Mike Houston, seen in the cult series Orange Is the New Black, where he plays a prison guard) and via a sound archive that we hear at length with his real voice ( it is a recording made without his knowledge when he assaulted a woman in his hotel room).

Inside the New York Times

To transcribe as faithfully as possible the atmosphere of the premises of the New York Times, the production shot on location in the heart of Manhattan for two weeks. Maria Schrader clarifies: “The New York Times were very supportive and enthusiastically involved in the film by giving us the opportunity to shoot in their beautiful building in Times Square. It was the first time they had hosted a film of this scale in their premises.”

At the time of filming, many of the employees were telecommuting due to the Covid pandemic, which allowed the crew to work mostly in empty spaces. The director recalls: “It was a very strange atmosphere, like frozen in time, in the spring of 2020. There were hundreds of empty desks, intact with copies dated March 2020, still lying there, turning yellow. It felt like in Pompeii.

She Said: an actress victim of Weinstein plays her own role in this investigative film

Stock up for the winter
Five years of #MeToo: from Angèle to Sex Education, how the movement has established itself in pop c...
"Stranger Things": season 4 is revealed in a new trailer
Tweet
Share
Share
Pin
Other links: https://awardworld.net/resources/