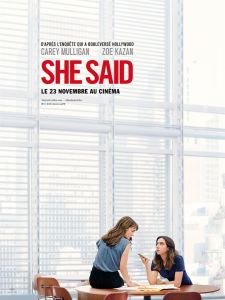 SYNOPSIS: Two journalists from the New York Times, Megan Twohey and Jodi Kantor, have together brought to light one of the most important scandals of their generation. At the origin of the #Metoo movement, their investigation broke decades of silence around the problem of sexual assault in Hollywood cinema, forever changing American society and the world of culture.

While Me too has profoundly upset the film industry and the case Harvey Wenstein served as a detonator to free women’s voices, it is not surprising to see five years after these cascading revelations a filmmaker seizing on this burning subject. She’s the director Maria Schrader (I’m your man) who sticks with She Said, to the adaptation of the book by two journalists from the New York Times, Jodi Kantor and Megan TwoheyShe Said, the underside of the investigation which revealed the Weinstein affair. The two young women obtained with other colleagues the highest journalistic distinction for their investigation, the Pulitzer Prize. Written by Rebecca Lenkiewicz (Disobedience, Colette) She said allows the German director to tell the mechanism of the investigation that brought down the mogul of the company Miramax, who was all-powerful for years, the feeling of impunity slung over his shoulder. By dissecting the modus operandi of the producer, by discovering the non-disclosure agreements extorted against tidy sums, the two journalists sought and found many women (actresses, ex-employees of Wenstein…) and persuaded them to testify. In the movie, Maria Schrader affixes the framework of the film investigation, popularized by the master standard of the genre, The President’s men in 1976 or by spotlight in 2015 and it is clear that it has made the virtues of its models its own. 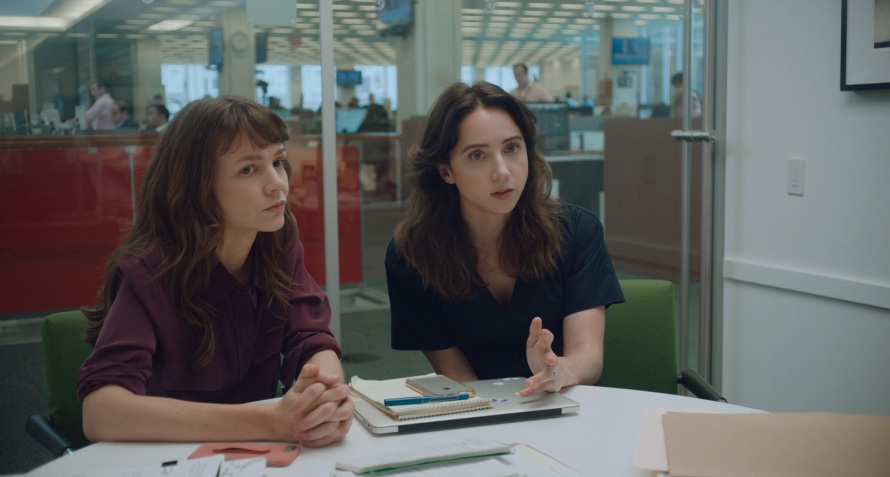 If we are far from the action film, the subject of investigative journalism, must, without being able to resort to movement, to maintain the attention and to advance investigations by multiple narrative twists and other false leads. This is one of the difficulties of the company, which its predecessors managed to resolve, without ever departing from their initial note of intent. She said also succeeds, and if the investigation is known, its undersides, its shenanigans, its twists, are less so and the film reveals in great detail the way in which the famous producer committed his crimes without being worried for years.

Whether She said gives pride of place to the two reporters, the film does not idealize them. They are fallible, have nothing of superheroes (their daily life is often very banal, between postpartum depression for one and juggling between husband and children for the other). Their association is not obvious at first but their understanding, their complicity and their complementarity will make a formidable tandem. Their pugnacity in the face of the silence of victims who are unable to free themselves from the weight of evil will allow them to perform miracles. Zoe Kazan and Carey Mulligan lend them their talent and it is far from easy as the opportunities to distinguish themselves are rare. Not that the two actresses are neutral, quite the contrary, but it is in their precision and the rigor of their investigation that they are formidable, that they are in line with the characters embodied by Redford, Hoffman Where Ruffalo and that, long after the screening, we think back to their impeccable performances. Above all, we are going to register definitively in the fan club of Zoe Kazan which completely blew us away.

Also difficult for Maria Schrader to use a spectacular staging with strong camera movements. The realization is often static, discreet and leaves the subject in the foreground and above all it makes room for the decisive courage of the victims of Wenstein. The whole thing can sometimes seem rather illustrative but it is for a good reason. One of the really good movie ideas is not to show the face of Wenstein by filming him from behind to make him fall back into the anonymity to which his condemned status will bring him back. And make him fall for good into the oblivion from which he should never have come out. Finally, She said is a real plea for the victims, who with the force of the wrist have extracted themselves from their conditions to finally find the respite that the conviction of these crimes grants them at least. She said rises to the height of his predecessors because he is never in the show and always ready to leave the victims the place that is due to them without ever denying them this right.

Poet Natasha Trethewey: "My mother's death is a wound that I carry that does not heal"
The Met Opera on Virginia Woolf's time for The Hours - News - Ôlyrix
Jane Smiley and Shelby Van Pelt's Mysteries Push the Boundaries: NPR
Tweet
Share
Share
Pin
Other links: https://awardworld.net/resources/