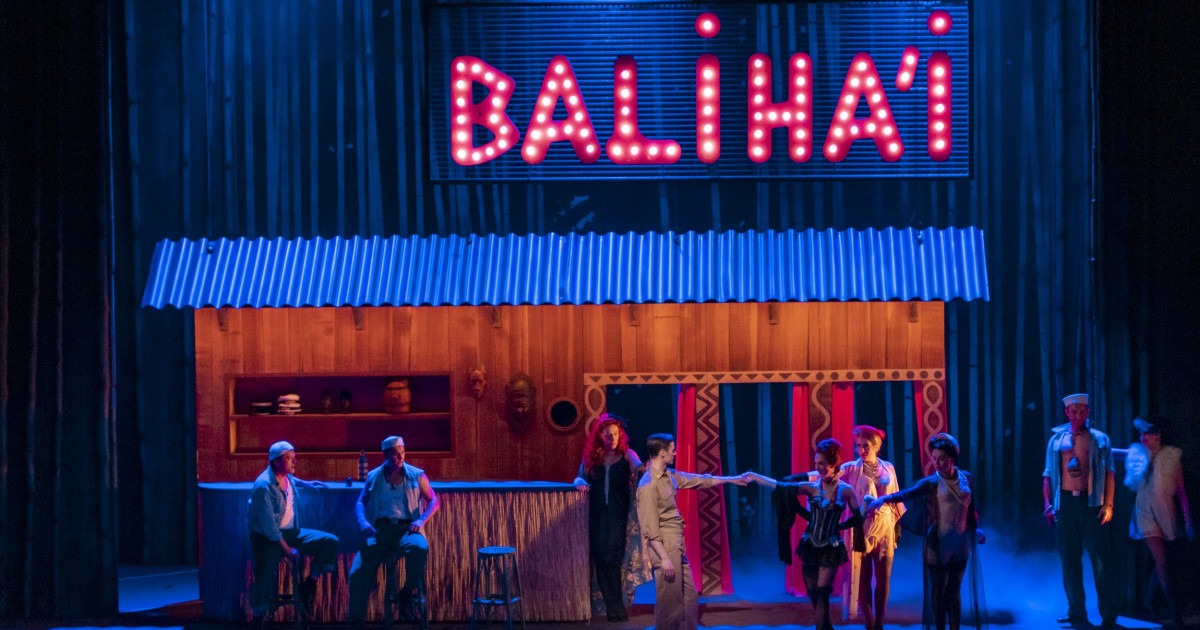 The Toulon Opera performs a French premiere of South Pacific by Rodgers & Hammerstein, a cult work in the United States, which brings together two themes still alive today: the world war and the racism inherited from colonialism.

A great classic of the American lyrical-popular heritage is offered every year in Toulon, the opera house having given itself the mission of making people (re)discover this genre of musicalby regularly programming new productions, drawn from the great successes of the post-war years (our review of Wonderful Town And the one of Sweeney Todd). South Pacifica particularly award-winning work in the USA, had to wait for the reopening of theaters to make the harbor of Toulon resonate with its lyrical-pacific militaria.

Richard Rodgers & Oscar Hammerstein, the composer and his librettist draw from James A. Michener, and two of his Tales from the South Pacific (Pulitzer Prize in 1948), the writer having taken part in the fighting during the American-Japanese conflict in the Solomon Islands between 1942 and 1944.

This musical, social and romantic comedy is based on emblematic figures: the soldier furrowing the seas and the air, the nurse-disciple of Florence Nightingale, finally, the local figure all legged and exotic, all among the great motifs of American patriotic culture (Independence Day, flag, status of freedom). The work questions love unions and disunions but also between the communities and origins of the American meeting pot.

The reading of the director Olivier Bénézech, therefore, installs this work created in 1949, in its historical fidelity and in a position of command. The evocation of a paradise Polynesia comes as a counterpoint to the horrors of a war that will become nuclear. Large meteoric skies, projected by the video, install the universe in these confetti of the Polynesian atolls. The housing modules slide on the stage, which, extended behind the pit, advances towards the public. The sometimes acrobatic and circus choreographies of Johan Nus, performed by a troupe of twelve dancer-singers including four dancers, are fully integrated into the plot: dance evenings and shows like so many moments of relaxation making people forget the rage of the fights, while the image and the sound of the bombers come at times to obscure the horizon.

Luc Londiveau’s decors subtly affirm an uninhibited kitsch, drawn from different universes: cinema, comics, animation, Disney figures from the 1950s to those of Polynesian women in loincloths and other pin-ups, who came to maintain the morale of the troops. . Facing them are sailors in blue or white uniforms, colors that bring out the contrasts between peoples. The lights by Marc-Antoine Vellutini are consistent with the plot and are part of the decor. Ribbons of lanterns or projectors light up white buildings open to the ocean.

Frédéric Olivier’s costumes are opulent and deliciously make up the bodies. A moving posthumous tribute was paid to him, and in the spirit of the show – a wall lined with his most beautiful pieces – during the salutes.

The many artists who populate the stage are soundproofed, as required by a genre that calls for many talents. Soprano, dancer and comedian Kelly Mathieson performs the role of nurse Nellie Forbush in theU.S. Navy, by a knitting that she realizes with ease and freshness, with her companions in the nasal voice. His vocal micro-climate gives pride of place to the “é”, open and vibrated, as well as to very fine ways of attacking the sound. The values ​​specific to the Nightingale nurse take over, while she comes to affirm by a subtle placement of her voice, a little more sharpness, the opening of her conscience.

The Polynesian Bloody Mary (Jasmine Roy) dresses up to match her character with an accent and a syntax that voluntarily betray the Western vision. Her “Bali Ha’i” lets flow a syrup of aromatics that she accompanies with evocative and magnetic swaying movements. As for her, she plays on the “a”, sorts of perches on which her vocal line comes to rest and set off again.

In her small role as Liat, Romane Gence performs her dance of the seven veils with an ideal dose of sensuality. The seduction of the young Polynesian is further accentuated by the enveloping presence of Elisabeth Lange, a member of the choir of the Toulon Opera, as Lead Nurse whose voice has reflections of Madame Butterfly.

Among the men, a majority of performers drawn from the fine team of Wonderful Town share the stage. The Émile de Becque of the quick and charming American baritone William Michals, brings to the show his operatic, almost Verdian dimension. He prepares the song by delicately digging into the resonances of his spoken voice, thus finding low and high accents, while his timbre expresses a whole palette of emotion and action. He coats his vibratos to give thickness to his character knowing how to pose the voice like the game.

Tenor Mike Schwitter plays his comrade, Lieutenant Joe Cable, another endearing character, with a more tragic destiny. He occupies the scenic and acoustic space with a delicate vocal line, throbbing with shadow and light, his tessitura drawn towards a little more chest or throat.

Seabee Luther Billis (from the incandescent Thomas Boutilier) is a loyalist, military-American version, giving himself body, facial expressions and diction entirely to the show. He brings with his communicative energy all the companyor gives the answer all in nerve and muscle.

The expert musical direction of Larry Blank, at the head of the Orchester de l’Opéra de Toulon, communicates to the phalanx, from the opening, a luminous momentum which cuts from the depths of the pit, incisor masses, at the using minimalistic gestures. The orchestration, which sounds on the stages of Broadway, smacks of the military band, without taking pleasure in it, while the strings bring the sentimental lyricism which is at the heart of the plot. The muffled trumpet sometimes recalls the jazz of an Erroll Garner. All the sound space is used, from the deep nails of the tuba, which modulates its effects well, to the throbbing clouds of the small harmony. The phalanx responds to the virtuoso invitation of the score.

The enthusiastic audience applauds the show until the curtain closes.

South Pacific, a musical for peace at the Toulon Opera – News – Ôlyrix