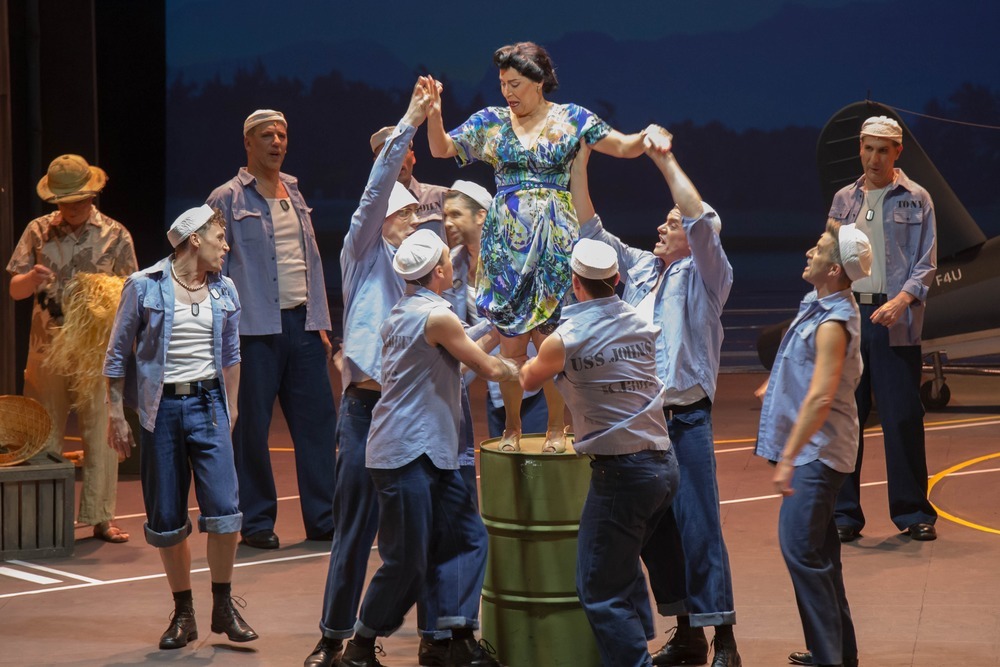 Do you know the New Hebrides, now Vanuatu? This Melanesian archipelago, located north of New Caledonia, was an American base intended to contain and fight the Japanese during the Second World War. English and French were spoken there, since the condominium was shared by the United Kingdom and France. Two of the 83 islands will be the scene of South Pacific, Musical play, written four years after the end of hostilities, to become one of the greatest successes of musical comedy (accumulating awards, Tony Award, Pulitzer Prize). Surprisingly, if the 1958 film made the work known in France, the original work was never produced there. The Toulon Opera, exemplary in its relationship open to all genres of lyrical expression, took up the challenge.

The subject does not borrow a junk exoticism suitable for satisfying the Americans at the end of the war: drawn from short stories based on direct testimonies, the libretto, beyond its undeniable dramatic qualities, is of a rare delicacy of ‘writing. Everyone’s psychology is fair, thorough, social relations, decor, the smallest accessories are a truth that every spectator who has lived in the Pacific will be fond of recognizing. Oscar Hammerstein II writes here a perfectly plausible story, and this authenticity underlies the musical success of Richard Rodgers, his favorite accomplice.

“Tell me why life is beautiful” is a French song, essential to the work. It is two children who sing it at the beginning, then at the end, joined by their father and their adoptive mother. Emile de Becque, a French planter, widower of a Melanesian woman with whom he had these two children, falls in love with an American nurse, Nellie, whose racial prejudices will hinder their love. Simultaneously, an American intelligence agent, Lieutenant Cable loves Liat, daughter of Bloody Mary, a Tonkinese trader. But, for the same “reasons”, the brilliant soldier will refuse to marry her. As part of a military base, whose most colorful character is Seabee Luther Bilis, between the camp, the staff, parties, receptions, the search for women, etc. , the intrigues are tied, until the battle starts… Bittersweet end, since if Emile and Nellie rebuild a happy couple with the children of the first, Cable perishes in the fight. “Tell me why life is beautiful…” In this post-war period when segregation remained the rule in the South of the United States, the position taken by the authors did not lack courage. Bernstein will go further with West Side Story, but eight years later, in 1957.

Olivier Benezech and Larry Blank ideally master all the workings of the genre. The staging only calls for praise for the renewed framework, always right, offered to the action. We remember Wonderful Town, given right here in 2018. You don’t change a winning team, and this one found itself for this new creation programmed before the pandemic and which is finally seeing the light of day. The sets and projections (the changing tropical sky), the costumes, which we do not count, are of an uncommon fidelity and richness of invention. Obviously, the direction of the actors and the choreographies, directly inspired by Broadway, are stunning in their virtuosity, precision and accuracy. The music is sincere, certainly dated – but Don Giovanni Where Carmen aren’t they dated? – with a rare flavour, reminiscent of a bygone era. Among the melodies, several will become standards (Some Enchanted Eveningwhich will be taken over by Frank Sinatra, Bob Dylan and even Placido Domingo; Bali Hai ; Younger than Springtime ; A Wonderful Guy).

The rhythm imposed by the libretto, close to the scenario of a film, arouses constant attention to this thrilling story, where laughter and smiles compete with emotion. Because all the artists on stage command admiration: singers, actors, dancers, acrobats, the palette of dramatic expression is the widest, exceptional. The voices are amplified, for the benefit of a constant intelligibility of the text. Voice formats, styles are appropriate for each character. All the women are mezzos, all the men are baritones or bass-baritones, with the exception of Lieutenant Cable, tenor. However, the characterization of each, the diversity of stamps are enough to differentiate them.

From the cast, exemplary, animated by the spirit of the troupe, we will retain only the main figures. For Emile de Becque, William Michals resumes the role created by Ezio Pinza, reconverted in the musical after having sung 52 roles in the opera, particularly at the MET. Both happiness and emotion are at the rendezvous of this challenge: the voice, warm, well-timbered, powerful, the superlative playing, the fullness of expression have earned us a planter with physical, psychological, dramatic and vocal accuracy. exceptional. His equal fluency in both languages, without the slightest trace of accent contributes to this truth. The young Lieutenant Cable (the only tenor in the cast) is entrusted to Mike Schwitter. We will particularly remember his Younger than springtime, just, not trying to imitate Sinatra. His malaria crisis is larger than life. Thomas Boutillier is Seabee Luther Billis (CB = Construction Battalions and also Sea Bee). He already has the athletic physique of the job, his speech and his presence. He burns the boards, occasionally contributing to the food character of the work. But the comic trooper of Thanksgiving, transvestite in a vegetable skirt and coconut bra, is also a big mouth with a big heart. The ranks, Scott Emerson and Sinan-Bertrand, are real senior officers. On the female side, the success is no less accomplished. Kelly Mathieson, accurately portrays Nellie Forbush, this young woman dependent on her mother and her prejudices, who will flourish by choosing love. Youth, vocal, dramatic and choreographic talents are there, and the pathetic sensitivity of the heroine hits the mark. Jasmine Roywhose commitment and compositions we always appreciate, earned us a Bloody Mary, skillful trader who does not have cold eyes. The portrait is realistic of this Asian without complex, authoritarian, skillful and loving. The mature woman’s voice is still just as rich, and her anger exemplary. All the supporting roles deserve mention, not to mention the two children, Ngana, sung by Leana Tuiand Jerome (Leo Chamant-Lacroix) who bring their freshness and tenderness to a world that needs it.

The Toulon Opera Orchestra, under the expert and inspired direction of Larry Blank, finds the expected dynamics, rhythms, colors and elegance. As for the artists of the choir, individualized in their playing, but forming ensembles (Boys / Girls) close to perfection, they call for nothing but praise. Congratulations again to those who provided so much happiness and emotion on this memorable evening.

“Tell me why life is beautiful” | Forum Opera