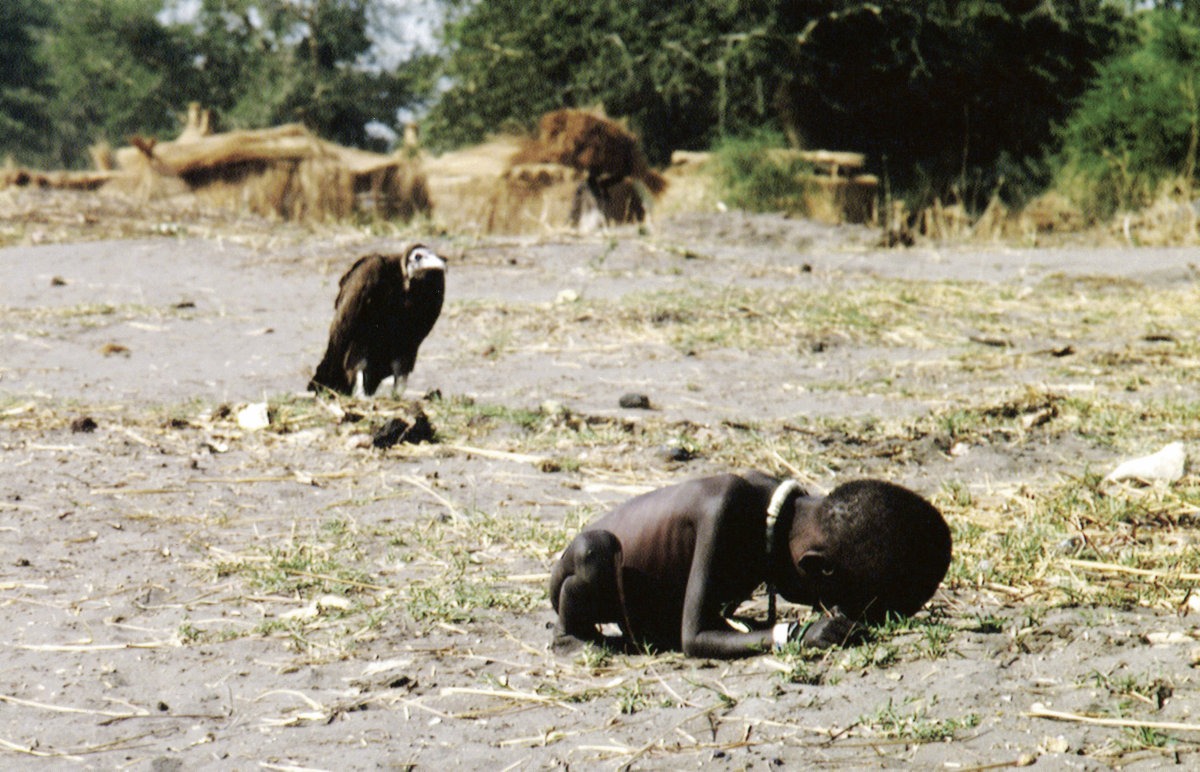 The heartbreaking photograph made an impression. We discern a black-skinned baby dragging himself, skeletal, exhausted, on what looks like, in our Western imaginations, an African desert. Worse still: behind the child is positioned a vulture, a bird of misfortune which watches for the death of its prey, too weak to defend itself.

The photo called “The little girl and the vulture” by Kevin Carter (South Sudan, 1993) . © Kevin Carter/Sygma/Corbis

There are images that synthesize the dramaturgy of a tragedy. Like that of the little Syrian drowned on the Greek shores, while his parents were fleeing the war, this photograph alone illustrates the famine that raged in the early 1990s in South Sudan in the grip of civil war.

The New York Times publishes it in its edition of March 26, 1993. It accompanies an article by the great reporter Donatella Lorch on the situation in the country. Her caption is succinct: “A little girl, weakened by hunger, collapses on the way to a food supply center in Ayod. Nearby, a vulture waits. »

Kevin Carter, one of the founders of the famous Bang-Bang collective

The impact of the image, signed by South African photojournalist Kevin Carter, 29, one of the founders of the famous Bang-Bang collective which denounces the brutalities of the end of apartheid, is immediate. The newspaper is assailed by letters eager to know the fate of the child. An editorial was even written in the days that followed in order to reassure readers: the child was able to join the centre. It is not known, however, if he survived.

A year later, on April 12, 1994, Nancy Buirski, photo editor at New York Times, call its author. She tells him that he has won the prestigious Pulitzer Prize. But, honored by his peers, the photographer is, at the same time, vilified by readers, accused of not having assisted the child, of being a “scavenger of information”. The you Petersburg Times writes thus: “The man who only adjusts his lens to best frame the suffering is perhaps also just a predator, one more vulture on the scene. »

Everything happens as if the photojournalism, as committed as it was, had to go beyond testimony and be accompanied by a moral and ethical pact, which would have been lacking here. The worst is that Kevin Carteroverwhelmed with debt, committed suicide on July 27, 1994. Could the shocking image have killed its author, overwhelmed by guilt?

Several years later, Alberto Rojasphotojournalist at El Mundo, finds witnesses and restores the context of the shooting: that day, the child who is in fact a little boy is not alone, as the photo suggests. He is a few meters from his father, the medical staff, the Doctors Without Borders care center, and wears a bracelet which attests to his care. Kevin Carter takes five shots.

After long minutes, he chases the vulture before walking away from the scene and breaking down in tears. He is cleared, in particular by his colleague Joao Silva, present on the spot, of the serious accusation according to which he would have left the child for dead. But this one, who survived the famine, died in 2007 of malaria, endemic in the region.

To be continued in this series (Sunday July 11 on l’Humanité.fr and Monday 12 in l’Humanité): 1960. When Korda immortalized Che

The little boy and the vulture