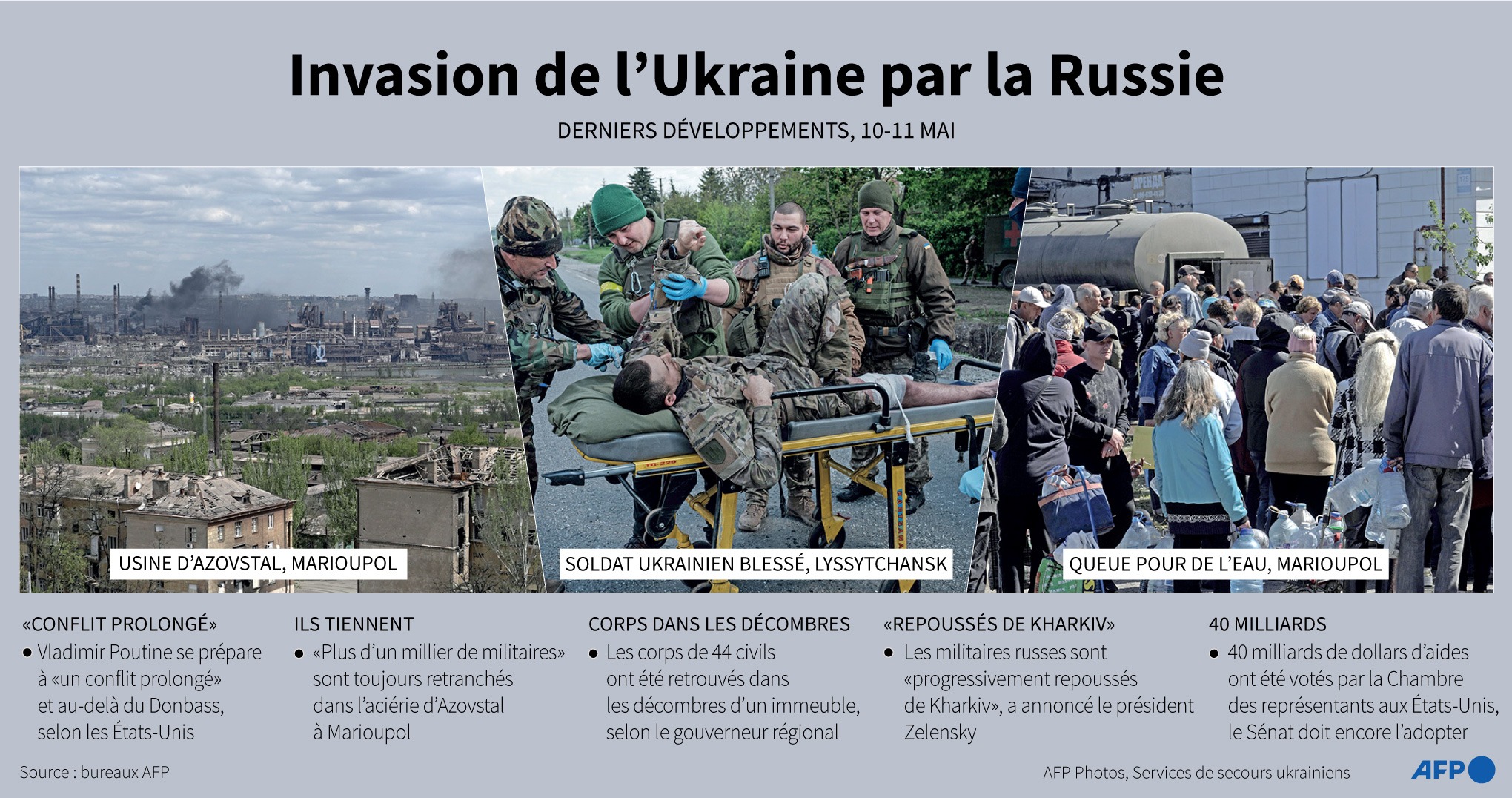 The statements come as US intelligence chief Avril Haines warned on Tuesday that Russian President Vladimir Putin was preparing “for a protracted conflict” and wanted to achieve “goals beyond Donbass”, counting on a gradual weakening of the security system. Western determination to stop it.

According to her, Russia has in its sights, beyond the south, Transdniestria, a separatist region of Moldova whose southern tip is only about sixty kilometers from Odessa.

According to the Ukrainian command for the south, Russian troops are in the process of hitting “mercilessly” the region of Mykolaiv, the last lock before the metropolis of Odessa. “Private homes, agricultural facilities were damaged and the electricity supply to one of the localities was interrupted,” he said overnight from Tuesday to Wednesday.

In late April and early May, explosions shook Transdniestria, fueling fears of an extension of the conflict. The European Union announced on May 4 that it was going to “considerably increase” its military aid to Moldova.

Deliveries of Russian gas to Europe via Ukraine were also down on Wednesday, for the first time since the start of the conflict.

Ukrainian gas pipeline operator OGTSOU has accused Russian forces of “interfering” in its facilities in the Lugansk region and preventing the usual flow of gas from being maintained.

He said Wednesday that the Russian giant Gazprom had cut off the tap to one of the Ukrainian branches of the gas pipeline, and requested the transfer to another crossing point.

Gazprom said it was impossible to reroute deliveries, while volumes transiting through another crossing point – located in Sudja, in the Russian border region of Kursk – have already increased. But not enough to compensate for the drop – by 18% on Wednesday, according to the Ukrainians – in volumes passing through the Lugansk points.

“We are closely monitoring the situation,” reacted Wednesday the German Ministry of Economy, whose country is one of the main European customers of Russian gas. “Germany’s energy security is currently guaranteed,” he added, however.

So far, both Moscow and Kyiv have kept gas flowing, although the European Union has struggled to prepare for a disruption in its supplies since Vladimir Putin ordered payment for deliveries in rubles – a contractual change that she finds unacceptable.

These gas disruptions come as Russia continues its offensive in the Donbass, slowly gaining ground.

The twin cities of Severodonetsk and Lyssychansk, besieged, seem in particular to be able to fall at any time, noted AFP. The Ukrainian army seems to have more and more difficulty in holding the front line, with Russian offensives which “come in waves”, according to a soldier interviewed on the spot, requiring perilous operations to evacuate the wounded.

On the other hand, kyiv is pleased to have pushed back the Russians who had been firing for weeks on the north-eastern districts of Kharkiv, the country’s second city, and to have taken over some small towns in this region close to the Russian border.

“The occupiers are gradually being pushed back from Kharkiv,” President Volodymyr Zelensky said in a video late Tuesday, praising Ukrainian fighters who “show superhuman strength to drive out the invading army.”

In Mariupol, if the hundreds of Ukrainian fighters who entrenched themselves there still hold the Azovstal steelworks, they are also constantly bombarded, according to kyiv.

Vote on US military aid

On Tuesday evening, the American House of Representatives adopted an aid envelope for kyiv of nearly 40 billion dollars, including an economic and humanitarian component, but also arms and ammunition.

It must now be voted on in the Senate, at the end of the week or at the beginning of next week, before being promulgated by the American president.

The European Union continues to try to convince its 27 member states to adopt a draft embargo on Russian oil, currently blocked by Budapest. An agreement is possible “within the week”, assured Tuesday the French Secretary of State for European Affairs, Clément Beaune.

This project is part of a sixth package of sanctions against Russia in preparation in Brussels. Witnessing the effects of unprecedented Western sanctions on the Russian economy, sales of new cars continued to collapse in Russia in April, falling by 78.5% over one year.

But the Ukrainian economy is suffering even more. Some 30% of jobs have been lost there since the start of the war, the International Labor Organization said on Wednesday. The IMF had predicted in mid-April a fall in Ukrainian GDP of 35% in 2022, against -8.5% for Russian GDP.

However, kyiv seems to be gradually returning to normal: nearly two-thirds of the 3.5 million inhabitants of the capital, which had emptied the majority of its inhabitants at the start of the conflict, have now returned, according to its mayor. Vitali Klitschko.

Restaurants have reopened and sidewalk cafes are once again attracting customers, where many seem to ignore the anti-aircraft sirens that still sound regularly.

Ukraine: a pro-Russian official evokes an annexation of the Kherson region, gas disruptions