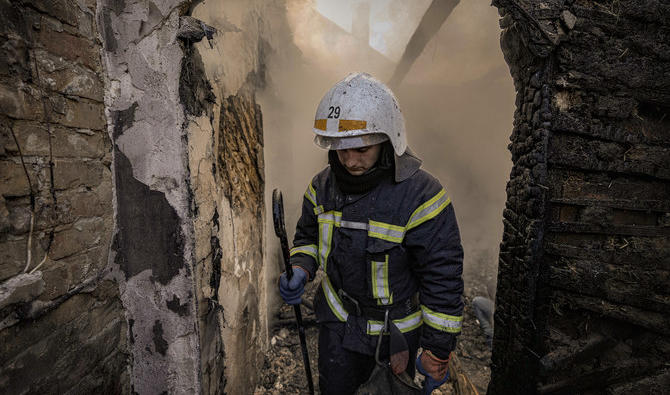 PARIS: Situation on the ground, international reactions, sanctions: update on the invasion of Ukraine by Russia.

The US government “has established that members of the Russian forces committed war crimes in Ukraine,” US Secretary of State Antony Blinken said on Wednesday.

The United States relies on “a careful review of available information from public and intelligence sources”.

In kyiv, a new strike on the parking lot of a shopping center left one dead and two injured, according to Mayor Vitali Klitschko.

Earlier in the day, four people were injured in bombings on buildings.

kyiv remains an objective of the Russian army, but it is blocked northwest and east of the Ukrainian capital. It has had to back down in recent days on several of these fronts, the mayor said.

Ukrainian President Volodymyr Zelensky warned that “nearly 100,000 people” were still trapped in the ruins of Mariupol (south), “under total siege, without food, without water, without medicine, under constant bombardment”.

Biden on his way to Europe

Joe Biden, on his way to Europe, where he will attend the three international summits organized on Thursday in Brussels – NATO, G7 and the European Union -, considered that a Russian attack with chemical weapons in Ukraine was “a credible threat” .

The American president, who will endeavor to strengthen the unity of Westerners and to increase the sanctions against Russia, will then go to Poland.

Russian President Vladimir Putin has announced that Russia will no longer accept payments in dollars or euros for gas deliveries to the EU, giving Russian authorities a week to work out the new system in roubles.

He explained that this was a reaction to the freezing of Russian assets in the West because of its offensive in Ukraine.

NATO will deploy four new battlegroups in Bulgaria, Romania, Hungary and Slovakia to strengthen its defenses against Russia on its eastern flank, and is prepared to protect allies against nuclear attack, its secretary general has announced.

Jens Stoltenberg denounced “the political support given to Russia by China, including by spreading outright lies and misinformation” and “the possibility that Beijing provides material support for the invasion of Ukraine”.

Call for a boycott of Renault

The head of Ukrainian diplomacy Dmytro Kouleba on Wednesday called for a global “boycott” of the French car manufacturer Renault because of “its refusal to leave Russia”, following the invasion of Ukraine by Russian forces.

Earlier in the day, Ukrainian President Volodymyr Zelensky urged French companies operating in Russia to stop supporting the Russian “war machine” and leave the country, citing Renault, Auchan and Leroy Merlin, during a speech before the French Parliament.

He also denounced the functioning of the UN, which was unable to prevent the invasion, and called for profound reforms of this institution, in a video conference in front of the Japanese Parliament.

More than 3.6 million people have fled Ukraine and fighting sparked by the Russian army invasion on February 24, according to the UN, which estimates the number of internally displaced at almost 6.5 million from Ukraine.

In total, some ten million people, or about a quarter of the population, have been forced to leave their homes.

The United States will announce Thursday “a set of sanctions that concern both political figures” and “oligarchs”, announced national security adviser Jake Sullivan.

The International Labor Organization has decided to “temporarily suspend” its cooperation with Russia.

The Swiss food giant Nestlé has announced that it will further reduce the range of its products sold in Russia but maintain the supply of baby products and medicalized foods.

Update on Russia’s invasion of Ukraine