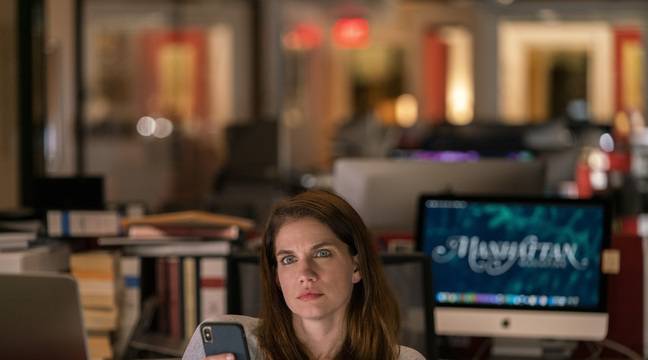 We no longer count the plots of series inspired by a true story. In Inventing Annaavailable on Netflix since Friday, the ex-star of Veep Anna Chlumsky plays Vivian Kent, a journalist in search of a good story, who will focus on Anna Delvey, a young Russian woman who defrauded young New Yorkers who are part of high society. Vivian Kent is a character inspired by the journalist from the New YorkMagazine Jessica Pressler, whose article “How Anna Delvey Tricked New York’s Party People?”, is the basis of this new series which she co-authors with superstar producer Shonda Rhimes (Grey’s Anatomy, How to Get Away with Murder, The Bridgerton Chronicle). Why are journalistic investigations inspiring more and more series?

Miscellaneous facts have always inspired fiction. In the early 1930s, the filmmaker Fritz Lang was inspired by the case of Peter Kürten, nicknamed the vampire of Düsseldorf, to M the cursed. In 1976, Alan J. Pakula adapted for the big screen the book by Washington Post journalists Bob Woodward and Carl Bernstein published in 1974 for The President’s Men.

A new development in the field of television series, the press article from which the story told in the fiction is inspired is mentioned in the credits and the journalist who carried out the investigation often participates in writing the script.

Pam & Tommyavailable on Disney+, is the adaptation of a press article, signed Amanda Chicago Lewis, published on December 22, 2014 in the columns of the American magazine Rolling Stones.

Dr Deathavailable on Starzplay, is based on an investigation initially transcribed in the form of a podcast of the same name, the French version of which is called
Dr. LaMort, which recounts the case of Christopher Duntsch, a malevolent surgeon who killed more than thirty people, including two dead.

Home Before Darkavailable on Apple TV+, is a series loosely inspired by the life and investigations of Hilde Lisiak, the youngest member of the American Society of Professional Journalists.

unbelievableavailable on Netflix, is the adaptation of a journalistic investigation, published in 2015 and crowned with the Pulitzer Prize, retracing the investigations carried out by two detectives from Colorado in 2011. The award-winning journalists have also worked as consultants on the scenario of the series, very faithful to reality.

dirty johnwhich follows the story of sociopath John Meehan, was originally told in a podcast by an investigative reporter from the Los Angeles Times. And The Girl from Plainvilleseries carried by Elle Fanning, to be discovered soon on Starzplay, will be the adaptation of an article by Jesse Barron, published in Esquire.

Society is preparing the adaptation of his successful investigation on Xavier Dupont de Ligonnès. So Press, the magazine’s publisher, has signed a partnership with Federation Entertainment in order to co-finance and bring future investigations to the screen. “The deal we made with Federation is a first, no one had done this in France before and no one since I believe”, comments Franck Annese, the boss of So Press

Why do so many journalistic investigations end up on our small screens? “There is a real appetite on the platforms for this kind of story and the current volume of production requires a lot of stories. And the best way to find them is still to look where they exist, that is to say in reality”, analyzes Pierre Boisson, one of the four writers behind the investigation of Xavier Dupont de Ligonnès in the magazine Society. And to remember: “All the great non-fiction stories generally give good adaptations, because they are good stories. »

Another reason given by the journalist, “long-term non-fiction articles have more resonance and find more support in the press. They were a moment in disuse and are now upgraded. This gives material to fictions since they are detailed articles in which the information is approached in a totally different way. »

Another advantage for producers of fiction, an investigation carried out by experienced journalists, “these are higher costs than the development costs of an original scenario sometimes”, notes Franck Annese again.

Journalists are increasingly being asked to pay attention not only to facts, but also to “storytelling”, that is to say the way of telling the stories they report. A journalistic culture very present in the American media and in certain magazines in France, which adopt long-term formats like at So Press.

“There is information and journalistic rigour, but what we like to do is tell stories. When we wrote the article on Xavier Dupont de Ligonnès, all the questions we ask ourselves today about the screenplay are questions around which we have already asked ourselves, even if that does not mean that we will solve them in the same way for a TV fiction”, explains Pierre Boisson, who was quite naturally chosen to adapt his investigation for the small screen with a co-screenwriter. “We save time, quality, intelligence of the story by relying on the person who carried out the investigation”, believes Franck Annese.

For the journalist turned screenwriter, the work of adaptation for the small screen is based on the “same springs of narration”. “In the matrix of journalists at So Press, there is a propensity to think about story, story, characters and springs that we use in the scenarios. So it’s quite natural, ”adds Franck Annese.

Many journalists have become screenwriters. Before creating TheWire Where TremeDavid Simon spent twelve years in the editorial staff of the Baltimore Sun. “He did not leave one camp for another, the two camps are reconcilable”, comments Pierre Boisson.

“We remained journalists in our veins and our souls. It is a sacred profession, we miss it every day. What we want by doing fiction is to reach a wider audience and in a more emotional way than with a documentary”, confided to 20 minutes screenwriters and former journalists Ron Leshem (Euphoria) and Amit Cohen (False Flag), on the occasion of the launch of their series No Man’s Land on Arte.

The truth, cornerstone of the fiction of the real

What interest to see a fiction on a journalistic investigation that we already know? “The same story can be told in two different ways and both be as exciting as the other,” rejoices Pierre Boisson. And to add: “In a television format, the story is more embodied, suddenly, we will live the story more through the characters than by reading an investigation. “We can also put things that are true and that we could not put in the investigation,” adds Franck Annese.

Fictions inspired by real stories also pose problems that classic fictions do not. At Séries Mania, the great reporter Florence Aubenas, warned about the fiction of TF1 Une Affaire française: “The intentions must be very clearly displayed. Yes, it’s the Gregory affair, no, it’s not the Gregory affair. Often, we take true stories where there is also an issue of innocence and guilt, legal issues. This is not to be joked about. We talk about real people, legal status, “are we guilty or innocent?” There, there must be fairly clearly drawn red lines. »

When we rely on real people and facts, “we can’t invent anything and everything about our characters”, agrees Franck Annese. There remains another challenge of these fictions of reality: “Guarantee the best possible fiction”, concludes the boss of So Press.

Why are journalistic investigations inspiring more and more series?